A Personal Tribute to Lloyd Pye

I'm very sad about the passing of Lloyd Pye, who has succumbed to a particularly aggressive lymphoma.  His illness was a relatively short one, and he faced the onset of his cancer with remarkable courage. I got to know Lloyd quite well down the years, although not so well that I could write an obituary or anything as formal as that.  But I would like to pay personal tribute to him here. 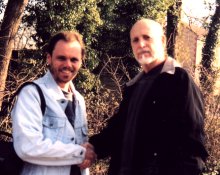 He was, for me, an inspiration when I first started writing about Sitchin's Nibiru.  Lloyd enjoyed visiting England, where he stayed with his friend and ardent supporter Belinda McKenzie in London.  From there, he travelled out to some of the smaller English cities to give talks about the Starchild Skull and broader questions about human evolution.

He was a Sitchinite, and a strong advocate of Intelligent Design.  He was passionate about the reality of alien intervention on our planet, and how important it was to bring the evidence of that intervention into the mainstream media.  He did not shy away from challenging interviews, or wolf-in-sheep's-clothes journalists.  For him, it was imperative for this work to get the widest possible exposure in a world where such questioning, dissident material is treated by the media as if it were Kryptonite.

That gritty perspective served him well.  He listened attentively to the academics and learned much from them, but could also pinpoint the difficulties in their arguments which so often got glossed over.  As a result, his lectures were highly informative and questioning.

Personally, I didn't agree with Intelligent Design, which he promoted in his lectures and books.  I was also uncomfortable with how much credence he gave to the claims of alternative medicine, especially when he was diagnosed with cancer (but then I have 25 years experience of working in a hospital to colour my perspective).  I listened attentively to his arguments about the Starchild Skull and remained open-minded, even to this day.  Coming from any other researcher, I would have lost interest long before, but Lloyd's analysis and the technical level of his arguments retained my attention and focus.

He came to little old Gloucester ten years ago to give a lecture on the subject.  When at my house, he thrilled my boys by showing them the skull reproduction he carried around with him (British Customs must have had a field day when Lloyd came through).  When publicity was proving tricky, Lloyd marched into the offices of the local rag and pretty much pinned down one of their hacks with the Skull - sure enough, he made the third page.  After all, how often does a purportedly alien skull come to Glos?

I once painted a painting of the Starchild, at his request.  He judged that it was too inaccurate and romanticised - which may have been true - but he clearly felt upset at having to reject the picture.  He was absolutely committed to his Starchild project, and his desire to nail it showed great integrity, even if it meant disappointing a friend.  You had to admire that about him.

I always loved his work on hominids, and agreed broadly with much that he had to say about Zecharia Sitchin and the planet "Nye-Beeroo".  I'm sure Zecharia realised what an important advocate and ally he was. 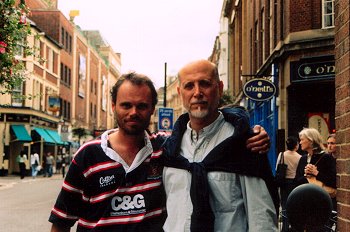 Lloyd was always witty and charming, and took health issues very seriously.  There was nothing about his lifestyle that might have precipitated cancer, so it must have come as a real shock.  He passed away at just 67, which is no age at all these days.  His greatest ability, I think, was to create a community around him of friends and advocates.  His networking skills, diplomacy and political instincts were second to none.  The 'alternative knowledge' community, as Lloyd called it, has lost one of its finest lieutenants, and many of us have lost a good friend.