A new study has simulated the evolution of the outer solar system following an early flyby of a star (1).  Stellar flybys could have happened at any time in the history of the solar system, with stars brushing up against the comet clouds in the distant reaches of the Sun's gravitational influence.  But for such a star to affect the Kuiper belt and objects lurking just beyond, it would have had to have penetrated much more deeply into the Sun's domain.  This is a far less likely event, except during the very early stages of the Sun's life.  During this time, the Sun was likely part of a stellar nursery, and quite probably even one of two stars within a binary dense core.  Because of the proximity of the neighbouring stars during the star-forming period, an incursion of one of the Sun's cousins becomes much more likely. 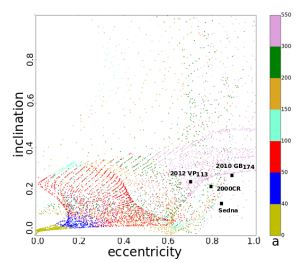 Trying to understand this early period of the Sun's history may be important because the outer solar system is not configured in the way it should be.  A number of anomalies persist in the region beyond the planet Neptune, including a scattering of extreme objects which are not affected by the presence of this outer planet.  This suggests that objects have been nudged outwards, away from its sphere of influence.  Neptune itself is something of an anomaly, too, because its mass is greater than that of its inner sibling, Uranus (2).  This appears odd, as the outer edges of the protoplanetary disk should be thinning out, not becoming thicker.  There are a great many theories to explain this anomalous collection of facts.  One of them is that another star swept by so close to the outer solar system that it disrupted its otherwise serene pattern, and robbed it of much of its outlying mass.

This new study used computer simulations to gauge the effect of such a flyby on the bodies in the outer solar system.  Different simulation runs were carried out using a variety of masses of the passing star, as well as the closest distance it achieved vis-à-vis the Sun.  Other variables included its inclination with respect to the ecliptic:

The study managed to reproduce the configuration seen in the outer solar system to a reasonable degree, including the populations of the Kuiper belt, the extended scattered disk objects known as the Sednoids, and the relative masses of Neptune compared with Uranus.  Of course, some combinations of factors provided better results than others.  The following is the best fit, as shown in the diagram opposite:

"Of all these parameter combinations the best match to the observed properties is found for the fly-by of a star of mass mp=0.5 Msun on an inclined orbit (60◦) with an angle of periastron of 90◦ passing the Sun at 100 AU, that was initially surrounded by a 150 AU sized disc." (3)

Importantly, the researchers also considered how likely such an event could be during the history of the solar system.  They concluded that the chance of such a flyby occurring during the first 10 million years of the solar system, whilst the planets are forming, and nearby nursery stars are at their closest, might by around 7%.  Extend that timescale out to about 1 billion years, and the chances are between 20-30%.  This may seem low, but actually compares quite well with some of the other simulations for, say, the manifestation of Planet Nine, whose existence can rely upon a chance event of only a few percent likelihood. 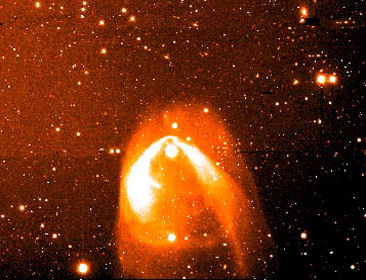 The problem for them is whether such an arrangement could then last for the ensuing billions of years:

"...simulations including a stellar interloper can perfectly re-create the observations to date. “But whether they’ll last for 4.5 billion years” or over the solar system’s entire life span, “is the million-dollar question,” says Scott Kenyon, an astronomer at Harvard–Smithsonian Center for Astrophysics who was not involved in the research." (1)

The lead author of the study, Susanne Pfalzner, an astronomer at the Max Planck Institute for Radio Astronomy in Germany, concedes this point, and is interested in carrying out further simulations to see if the configuration is able to hold up over the lifetime of the solar system.  Interestingly, the researchers do not seem to rule out a Planet X body being included in the outer solar system mix:

"Our simulations suggest that many additional Sednoids at high inclinations still await discovery, perhaps including bodies like the postulated planet X." (2)

Planet X is, naturally enough, a competing theory.  Its existence has been considered problematic for astronomers because there simply shouldn't be enough materials out beyond the Kuiper belt for it to have formed out of the protoplanetary disk.  However, the researchers of this study point out that recent observations of protoplanetary disks around other stars have shown evidence of planets forming at quite high distances - certainly well beyond Neptune's location in ouu own system:

"...newly available high-resolution images of discs around stars younger than 10 Myr show prominent ring structures at several 10s to 100s AU and beyond. Many authors interpret these as signatures of already formed or currently forming planets. If gas giants can form at such distances from their host star in such a short time span, it can no longer be excluded that TNO-sized objects can also form on time scales < 10 Myr." (3)

This makes for interesting reading, because the implication of this is that planets can form at much greater distances than has been 'allowed'.  In which case, there is no reason to dismiss a further planet of planets beyond Neptune.  Planets clear out their domains, by definition.  The existence of a substantial Planet X could also explain many of the anomalies.  What may be the issue is an outdated and unnecessarily restrictive concept of planet-formation.  I will be picking up this theme in my forthcoming book about Planet X, due out later this year.

It's often been thought likely that an early planetary collision was the reason for Uranus being knocked onto its side.  Recent scientific work using computer simulations has helped to confirm this, and nailed the culprit down to a planet of at least 2 Earth masses (1).  It may have been a grazing blow by the impactor, capable of reconfiguring/building the rings and moons, but insufficiently catastrophic to rip away more than about 10% of its atmosphere. 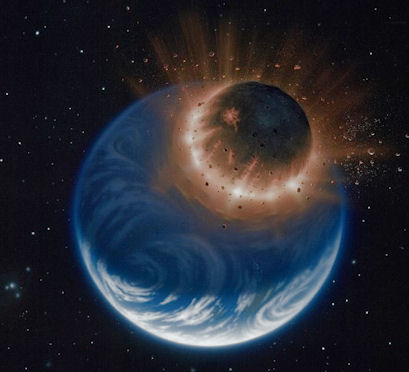 Additionally, there's reason to suspect that at least some of the impactor has had a long-term effect upon the planetary properties of the injured ice giant.  The research team wonder whether materials embedded into Uranus (careful...) may have created an insulating layer which holds in the heat of the interior of the planet.

"Most of the material from the impactor's rocky core falls in to the core of the target. However, for higher angular momentum impacts, significant amounts become embedded anisotropically as lumps in the ice layer. Furthermore, most of the impactor's ice and energy is deposited in a hot, high-entropy shell at a radius of ~3 Earth radii. This could explain Uranus' observed lack of heat flow from the interior and be relevant for understanding its asymmetric magnetic field." (2)

This might then explain why Uranus is so cold compared with its peers.  If the proposed Planet Nine resembles a mini-Neptune world (3) evicted from the planetary zone early on, then it may have undergone similar traumas.  This impact model may provide a reason to consider the cold temperature of Uranus as a by-product of interplanetary collision.  In which case, the projected temperature of Planet Nine drops, along with the ease with which it might be found using infrared telescopes.

What I'm particularly interested in here is when this took place.  The authors of the Uranus impact paper simply write that the collision occurred "toward the end of its formation" (2).  Was it during the planetary accretion stage, when the protoplanetary disk was being knotted into so many competing planetessimals, jostling for supremacy?  Or could it have been later, during the period known as the Late, Heavy Bombardment 3.9 billion years ago?  According to the Nice model (which I'm somewhat sceptical about), there was a period of migration of the great planets, bringing about chaos and disruption.  Was Uranus hit during this migratory phase?  The timing of this impact event seems to be an open question.

The 'tell-tale' signs of sub-surface water has been observed for the first time on Mars.  It may not be a lot, in the great scheme of things - the equivalent of a shallow lake perhaps 20km across - but the significance of the discovery is huge.  Sub-surface ice has been pretty much a given for a while, but an argument has been raging about whether water itself could still be present. 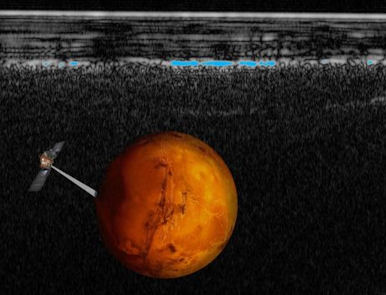 This argument has been driven by the presence of what are thought to be seasonal briny water deposits in the Martian regolith, as well as the alluvial fans  and dry river beds which have indicated relatively recent minerological processes.

"Radar instruments like Marsis examine the surface and immediate subsurface of the planet by sending out a signal and examining what is bounced back. The continuous white line at the top of the radar results above marks the beginning of the South Polar Layered Deposit; a filo pastry-like accumulation of water ice and dust. Beneath this, researchers spotted something unusual 1.5km under the ice.

""In light blue you can see where the reflections from the bottom are stronger than surface reflection. This is something that is to us the tell tale sign of the presence of water," says Professor Roberto Orosei [of the Italian National Institute for Astrophysics]."  (1)

Now, we know for certain that a "stable body of liquid water" is on Mars (2).  The discovery has been made on the Planum Australe at 193°E, 81°S, using radar measurements by Marsis, a radar instrument on board the European Space Agency's (Esa) Mars Express orbiter.  Mars joins a growing list of solar system objects with hidden oceans below decks - Europa, Ganymede, Callisto, Enceladus, possibly Ceres.

A very young binary star system in the constellation Chameleon has a tiny companion - an ultra low mass brown dwarf.  The existence of this very young brown dwarf/sub-brown dwarf has been confirmed by checking back through previous images of the CS Cha binary, and it is clearly part of this star system.  Its mass is uncertain, making it uncertain whether this is a planetary mass object or a young dwarf star.  The binary system has its own protoplanetary disk, perhaps some 55AU across.   This disk seems to be playing tricks with the light from the companion object, which is located some 210AU from the central binary star system (1). 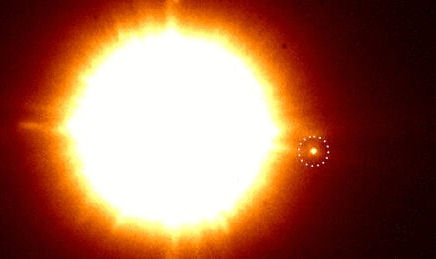 This light is polarised to a highly unusual extent, which is making a calculation of the mass of the object difficult.  The dusty protoplanetary disk itself has a large cavity within it, perhaps as large as 15AU across.  This arrangement strongly implies that planetary formation is an ongoing process:

"From unresolved mid- to far-infrared photometry it is predicted that CS Cha hosts a disk with a large cavity. In addition, SED modeling suggests significant dust settling, pointing towards an evolved disk that may show signs of ongoing or completed planet formation." (2)

Whatever its mass turns out to be, the companion object also seems to have its own "unresolved disk and dust envelope" (2).

2) C. Ginski et al. "First direct detection of a polarized companion outside of a resolved circumbinary disk around CS Cha", Astronomy & Astrophysics 616, 6 May 2018