Life Possible on Water Worlds After All

There seems to have been a recent shift in science towards a more positive outlook for the emergence of life on other planets.  Although water is clearly the prime ingredient for life, too much of it seems to create a problem.  So-called water worlds, which exhibit a global ocean and no landmass, are thought to be common enough.  If the watery planet is located within the habitable zone of a star, then one would expect these deep oceans to be an excellent environment for life to emerge.  However, the ocean requires an atmospheric blanket around it, and the planetary atmosphere's long-term stability depends upon geochemical cycles which circulate minerals and gases (1). 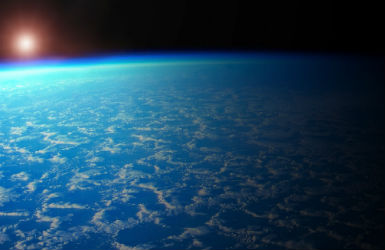 Particularly important is the amount of carbon dioxide circulating, which helps to modulate surface temperature.  Absorption of carbon dioxide generated within this cycle also affects oceanic acidity, which will also have a bearing upon the emergence of life (at least, as we know it).  The geochemical cycles need to create a stable environment over time to give life the chance to emerge, and this is not helped by variability in a star's energy output over time.  No wonder, then that waterworlds are also subject to a Goldilocks effect.

Worlds like the Earth, with its helpful mix of surface features, can buffer their environments through volcanism and the absorption of greenhouse gases into surface minerals in rocks.

"On Earth, atmospheric carbon dioxide increases surface heat through the greenhouse effect. Carbon also cycles to the subsurface and back to the atmosphere through natural processes.  "Volcanism releases gases into the atmosphere, and then through weathering, carbon dioxide is pulled from the atmosphere and sequestered into surface rocks and sediment," said Bradford Foley, assistant professor of geosciences [at Penn State]. "Balancing those two processes keeps carbon dioxide at a certain level in the atmosphere, which is really important for whether the climate stays temperate and suitable for life." (2)

Foley and co-worker Andrew Smye recently showed that conditions suitable for life can be maintained on planets which do not have plate tectonics to drive forward the geochemical processes (3). 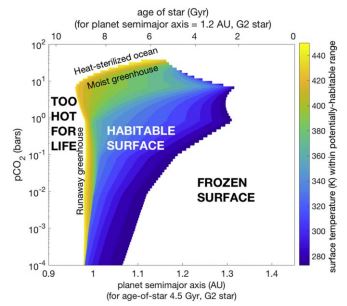 Waterworlds, however, present further problems.  They have volcanoes buried below oceans, and a self-evident lack of surface rocks to absorb gases, which will prevent may of the essential geochemical cycles from taking place:

"...rocky planets with water fractions greater than Earth may not behave geochemically and geophysically similar manners as the Earth. Furthermore, continental crust is unlikely to reach above the water layer. With no exposed land, key geochemical cycles including the draw down of carbon and phosphorus into oceanic reservoirs from continental weathering will be muted, thus limiting the size of the biosphere." (4)

Nonetheless, in some cases these mechanisms may not be needed to maintain sufficient stability for life to emerge - the planets themselves are sufficiently well-located and have a sufficiently decent chemical composition to allow life to emerge anyway (1,5).  The recent computer simulations which have provided this optimism were conducted for Sun-like stars, but the results can be extended for cooler stars, like red dwarfs, too. 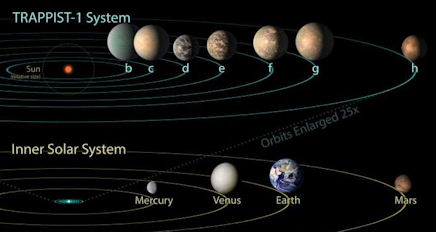 The Trappist-1 red dwarf system is blessed with seven terrestrial planets within its habitable zone.  Several of these have high ratios of volatiles, determined form their low densities.   Because they're too small to hold onto lighter volatiles it can be concluded that they have plenty of water.  The outer planets, in particular, could consist of more than 50% water.  As a result of this over-abundance of water, these planets fell into the category of being too wet to support life (6). However, the new computer simulations testing whether such waterworlds could provide a stable environment (5) go some way towards mitigating that pessimistic assessment. 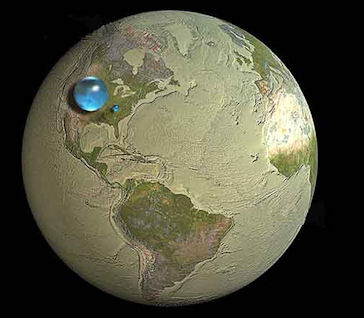 Because the outer Trappist-1 planets have so much water on board, there is a need to account for how these small worlds managed to hold onto this volatile material during the bright early life of the red dwarf system.  It has been suggested that the planets must have first formed beyond the ice-line of the star system, perhaps twice as far as they are now, before migrating inwards (4,6).  This contrasts with the inner, much drier Trappist-1 planets, which likely formed within the snow line.

It is interesting that this same logic does not seem to be applied to Earth in the same way.  The Earth is located towards the inner edge of the Sun's habitable zone and, by rights, should be a desiccated husk.  Yet, it boasts voluminous oceans.  These are thought to have been delivered to the Earth by comets and asteroids (the latter is favoured more recently (7), due to difficulties that emerge when comparing the isotopic ratios of Earth water compared to that of many comets).  Such mechanisms may apply to red dwarf systems, too, of course, which seem to have a greater abundance of water than yellow dwarfs, like our Sun.  Still, there seems to be an inconsistency in approach.  If the Earth has plenty of water in a relatively dry solar system, and it exists as liquid water because the planet is well within the solar system's ice-line, then the implication is that the Earth formed further out before migrating inwards.

I explore this further in my forthcoming book 'Darker Stars' (8).

7) Josh Davis "'Asteroid forensics' could reveal the origin of water" 17 August 2018, with thanks to Lee

Computer-assisted analysis of data from Gaia, the European Space Agency’s three-dimensional mapping mission of our galaxy, has revealed nearly 900 new stellar objects lying within 300 light years of the Sun (1).  These new objects are mostly 'highly active' red dwarfs, but there are also 111 new brown dwarfs (2).  Some of these dim stars have been found in parts of the sky which usually prove difficult to search, like the Galactic plane.  Many of the new stars have been found to belong to 'associations' of stars moving together, like flocks of birds (3). 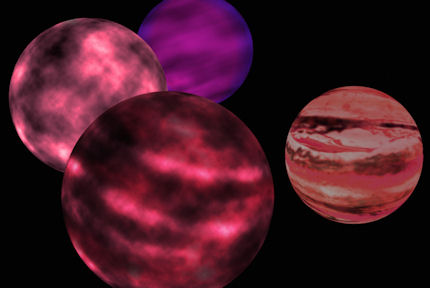 Not only do these associations indicate the evolutionary progress of clusters of stars, they also allow the common age of those stars to be determined.  By association, the age of a given star can be understood through the company it keeps.  Associations may be young, as the clusters emerge from their birthing stellar nurseries, or even a billion years old.

"Associations such as Tucana Horologium, TW Hya, and the AB Doradus moving group contain isolated objects that range in mass from a few solar masses down to a few Jupiter masses as well as stars with planetary–mass companions." (3)

I'm looking forward to learning more about these new brown dwarfs.  These kinds of surveys have produced candidate objects in the past which have really moved our understanding of brown dwarfs along.  It will also be really interesting to see if any of the closest brown dwarf (or sub-brown dwarf) candidates were 'missed' by previous infrared sky searches, particularly WISE.

A rather bizarre coincidence to relate to you.  It's the start of the new academic year, and I was explaining to one of my colleagues my inability to remember people's names.  As a teacher, this can be awkward.  After all, students like to know that you remember their name and, despite the fact that I tell them early on that it may take me until the end of the course before I've really cracked it, my 'disability' can prove troublesome.  I wondered whether there might be a name for it.  Usually, the name of this kind of condition would start with the prefix dys- (as in "dysfunction") followed by whatever's affected as a suffix - but in Greek.  So, I looked up the Greek for 'name' and came up with "ónoma".  Which would makes my embarrassing condition 'dysonomia' or, better, 'dysnomia'. 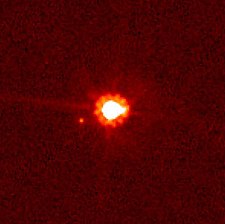 When I Googled this, I discovered that 'dysnomia' is also the moniker for a tiny satellite going around a distant minor body in the solar system, known as Eris.  Well, what a bizarre coincidence!  Eris was discovered by Dr Mike Brown et al. back in 2005, and I wrote quite a lot about that at the time (https://www.darkstar1.co.uk/xena.html).

Eris is one of the more troublesome scattered disk objects beyond the Kuiper Belt, and was initially named 'Xena' by Brown.  He went on to name its moon, too, continuing this entertaining 'Xena' connection.  The actress who played Xena (the Warrior Princess) was Lucy Lawless: hence 'dysnomia'; which is the Ancient Greek word Δυσνομία, meaning anarchy/lawlessness.  Obviously.  I can't even begin to explain this weird chain of connectivity.

Oh, and a big shout-out to my delightful students at the University of Gloucestershire; whatever the heck your names are...

The Contactee and the "Dark Star" Nibiru

The alien contactee Eddie Page has made some recent claims about Nibiru.  In a video interview with Kerry Cassidy of 'Project Camelot', he described Nibiru in terms of a "Dark Star" with a system of planets/moons (1).  Although he speaks a great deal about the writings of Zecharia Sitchin, and comparative texts from various ancient scriptures, his view of the Planet X body is that of a Dark Star object.  This appears to pick up upon my own revision of the late Zecharia Sitchin's work (2), which will likely prove contentious among many of his readers. 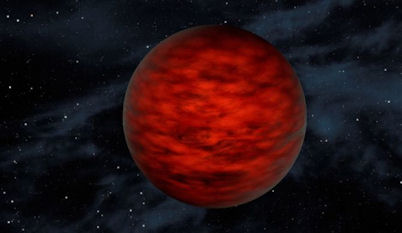 Eddie Page goes on to claim that Earth is in danger of an invasion from outer space as Nibiru once again rolls around.  The alien context is with the Draco, a serpentine alien species equated with the Nagas, rather than the more traditional Sitchinite crew, the Anunnaki.  According the Page, they seem to be rival species which seem to me to be getting separated into light and darkness.  Page's connection with these Pleiadians appears to be personal (3).