There are a number of theories about how the planets in the solar system formed into their current array.  It's fair to say that there are still some unsettled questions about the tumultuous early period of the solar system, when the planets formed from the vast protoplanetary disk as it wheeled its way around the Sun.  Much of the discussion involves the larger planets of the outer solar system; the dominant gas giants (Jupiter and Saturn) and more distant ice giants (Uranus and Neptune).  The late migration of these outer planets backwards and forwards was proposed in the Nice Model (1), of which various versions now exist in a complex tableau of astrophysical theory (2).  The Nice Model attempted to solve many issues about the present format of the solar system, in particular the distribution of the asteroid belts and the evidence of a period of massive and sustained bombardment long after the planets had formed.

In more recent times, our growing knowledge of exoplanets has demonstrated very clearly that the galaxy is a weird and wonderful place.  Planets come in all shapes and sizes and, perhaps more importantly, crop up in places they have no business being (3). 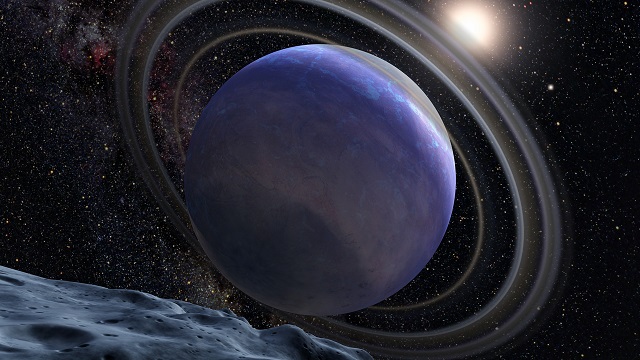 Many of the underlying assumptions about what was 'not possible' back in 2005 have been slowly trimmed back.  Quite a lot is possible, even if it shouldn't be.  In some ways, these findings have supported the Nice Model as migration of planets lends a hand to explain the weird positioning of some exoplanets.  On the other hand, some massive exoplanets have been found to form such a long way away from their stars, where the building blocks required should be scarce and scattered.  There's still a lot to understand out there, it seems.

I've dipped into the Nice Model a number of times before, particularly when discussing the possible origins of Planet X (4).  However, there is another potential strand to planetary migration that gets little mention in the astrophysics world: Whether the inner planets were also subject to migration at some point.  It's a subject  I've also considered before, when analysing whether the Earth's orbit could have been catastrophically altered by the arrival of a rogue planet from interstellar space (5,6) - an idea proposed by Zecharia Sitchin back in 1976 (7).  This has usually been in the context of an alternative explanation for the Late Heavy Bombardment some 3.9 billion years ago.  Perhaps the sudden instability in the solar system was triggered by the arrival of a massive interstellar planet which disrupted the stability of the planets including the Earth/Moon system?  The rogue intruder then became Planet X, the existence of which remains contentious and unproven, but for which some compelling indirect evidence exists (8).

There is very little in the scientific literature about inward migration of the Earth, despite the clear need to explain both the abundance and curious isotopic composition of water on our planet.  I've highlighted the rare exceptions in 'Darker Stars' (6).

Adding to this meagre offering is a theory which was published last year by a Danish group of scientists (9).  Their proposal covers a different time period from the Nice Model, perhaps only a few million years after the Sun first ignited into life.  Rocky planet formation was taking place within the immense gas disk surrounding the Sun:  It likely involved the mass accretion of pebbles into protoplanets and the subsequent merging of those protoplanets into larger bodies through catastrophic collisions (including the expulsion of many protoplanets from the solar system during this chaotic period). 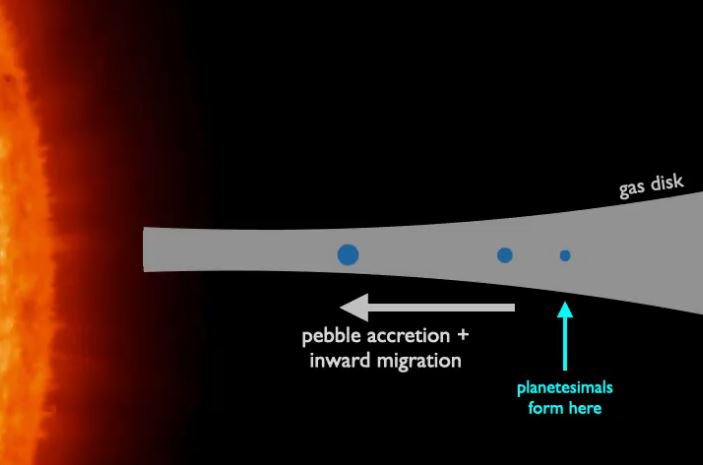 In this new model, the protoplanets were formed towards the back end of the inner solar system, around where Mars is now.  These protoplanets, representing Earth, Venus, and Theia, then migrated inwards from the 'inner planetesimal belt'.  Importantly, instead of collisions being the main driving force of planetary expansion, the protoplanets continued to accrue more mass from the inward migration of more building material:

"[We] present a model where inward-drifting pebbles feed the growth of terrestrial planets. The masses and orbits of Venus, Earth, Theia (which later collided with Earth to form the Moon), and Mars are all consistent with pebble accretion onto protoplanets that formed around Mars’ orbit and migrated to their final positions while growing. The isotopic compositions of Earth and Mars are matched qualitatively by accretion of two generations of pebbles, carrying distinct isotopic signatures. Last, we show that the water and carbon budget of Earth can be delivered by pebbles from the early generation before the gas envelope became hot enough to vaporize volatiles." (9)

A significant collision event did occur, however, when Earth and Mars-sized Theia encountered one another.  This catastrophic collision led to the formation of the Moon.  Because the inner planetesimal belt was beyond the solar system's 'ice line' at the critical point when the protoplanets formed, Earth kept hold of its volatiles.  The position of this ice line depends upon several factors, the authors argue, proposing that:

"...the primordial water ice line sits in the region between 1.2 and 2.0 AU in the first million years of disc evolution. This is the likely site for formation of the first generation of planetesimals in the inner Solar System." (9)

This is a really interesting idea which does potentially solve some mysteries.

However, in many ways, it's easier to explain the Earth's water issue through a later inward migration from beyond the established ice line.  This could have taken place during the Late Heavy Bombardment issue when the previously settled solar system was thrown into flux.

Again, there are two very different timelines available here - a couple of million years after the Sun's birth or, 600+ million years later.  You pays your money, you takes your choice.

The ZM Belt versus Planet Nine

The anomalies in the outer solar system that triggered the hunt for Planet Nine have been covered extensively in the Dark Star blog.  The concept of Planet X has been around since Victorian times, but had been going through a bit of a volatile time in the earlier part of the 21st century.  Planet X had become the bad boy of solar system mysteries, with any number of conspiracy theories about its imminent, destructive return. 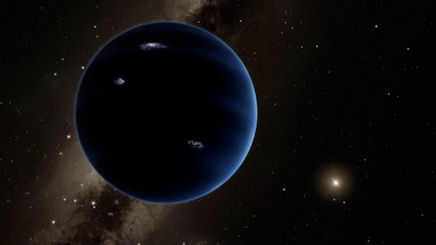 In 2016, the mysterious missing planet partially came out of the shadows when two academics from Caltech proposed the existence of a Neptune-sized planet way beyond the outermost planets (1).  The proposal was evidence-based and thorough enough scientifically, but was countered by arguments about observational bias in some of the supporting astronomical data about the Extended Trans-Neptunian Objects (ETNOs) at the heart of the controversy.  Other theories were presented as alternative explanations, including the possibility that another significant belt of objects beyond the Kuiper belt might be the cause of the anomalous orbits of the ETNOs (2).

"[This new instability] also implies a large disc mass (~1–10 Earth masses) of scattered bodies at hundreds of AU; we predict increasing numbers of detections of minor planets clustered in their angles of pericentre with high inclinations." (3)

Effectively, a new belt of objects beyond the Kuiper belt might be doing the same job as the proposed Planet Nine by self-shepherding the ETNOs.  This possibility, which had been modelled using super-computers by  does not satisfy Caltech's Konstantin Batygin:

"...self-gravitating calculations show similar planetesimal evolution to non-self-gravitating numerical experiments after dynamical instability is triggered, suggesting that the orbital clustering observed in the distant Kuiper Belt is unlikely to have a self-gravitational origin." (4)

Undaunted, the idea of a massive belt of distant objects beyond the Kuiper belt has been considered as a viable and 'natural' alternative to Planet Nine (5). Indeed, who's to say that there isn't another vast belt of objects between the Kuiper belt and the inner Oort cloud, irrespective of whether they are capable of causing the observed ETNO orbital clustering through self-gravitation?

The two main proponents of this idea are Alexander Zderic & Ann-Marie Madigan (6), and the shorthand moniker for this hypothetical belt makes use of both their names to become the 'ZM belt' (7).  Some of the most distant and eccentric ETNOs so far discovered may be the first objects of this belt to have been observed.

Given how hard it is for objects at this distance to be identified, there may be a flood of discoveries coming our way as new telescopes come on line. This step-up in observational capability includes the Vera C. Rubin Observatory's Legacy Survey of Space and Time (LSST) project.  It is due to start collecting data in 2024 (7).  If the ZM belt is out there, then the LSST survey should find a great many of its objects - if not Planet Nine itself.

7)  Darren Orf "The answer to the Planet Nine Mystery could come sooner than you think" 16 June 2022, With thanks to Lee