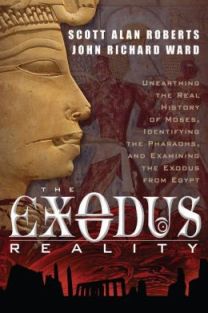 Subtitled: "Unearthing the Real History of Moses, Identifying the Pharaohs, and Examining the Exodus from Egypt"

There are a great many question marks that hang over the Biblical story of the Exodus, and the historical evidence for Moses and his people's flight from Egypt.  Authors Scott Alan Roberts and John Ward both offer a new hypothesis in this book.  That's right - they each offer their own theory housed within one book; each running as an interwoven strand over alternative chapters (surely, then, at least one of them must be wrong?).  It's quite a challenging format, and somewhat confusing for the general reader not as up to speed with ancient Egyptian chronologies as the authors.  I think I managed to keep up with it (the writing wasn't as difficult as Velikovsky, for starters), although I felt a bit like Dr Who in a malfunctioning TARDIS.

Why put a book together in this way, you might ask?  The book is adorned with many fine photos of the authors exploring ancient sites in Egypt, and its evident that they enjoy something of a 'bromance' throughout that shared experience.  The warmth of their professional relationship shines through the text, and the book likely reflects the evenings spent discussing archaeological theories over a few beers (or equivalent in largely Muslim Egypt).  But where listening in on this kind of debate on a North African terrace might make some sense, and even have been rather enjoyable, it doesn't convert easily into a book.  I think a Tolkein-like format of an unbroken storyline covering a significant fraction of the book would have been easier to digest.  Nevertheless, it's the content that matters.

So, let's look closer at what the authors had to offer in the way of new ideas.  Well, straightaway I hit the problem of trying to establish to which author I should attribute my notes.  Given that they wrote about different periods in Egyptian history, my memory of what goes where is a little vague.  So let's hope I get this right:

Even to establish that an Exodus took place at all is difficult.  Was it myth, or a story based upon some kind of historical reality? If the latter, then which pharaoh was the Pharaoh?

After the usual preliminaries (dedications, acknowledgements, a foreword, two prefaces, an author's note and an introduction), the authors provide an early-ish mission statement:

"It is our contention that the Exodus, in all its reality, is more than mere religious mythology or exaggerated happenstances blown into epic proportions. It is the tale, based on a true story, of the apocalyptic migration of an integrated people that followed on the heels of catastrophic events." (p47)

What follows is some philosophising about faith versus historicity.  'Scotty', certainly, is still conducting some kind of internal debate about what he should believe, even indicating that Faith must have a tangible subject - that one "cannot believe in nothing" (p71), an argument which certainly ignores Buddhist philosophy and the rather widespread nihilism evident across much of the globe.  So, he attempts to establish that the Good Book should be taken rather more seriously as an historical text than scholars do, because, well, you have to believe in something, right?

But things do get better.  Perhaps stepping back towards his more mainstream religious roots, Scotty takes a more or less conventional view on the dating of Exodus, arguing  that the 'Pharaoh's Daughter' was Hapsheput, daughter of Thutmoses I (p144).  He then offers the hypothesis that Moses was her favoured courtier Senenmut (p150), placing the Exodus events into the 15th Century BCE - more specifically 1446 BCE (p152), based upon standard Hebrew chronologies.  He builds a reasonably convincing case, tying in strands of Exodus with known events and personalities of 15th Century BCE Egypt over several of the Pharaohs' reigns.  So, in this scenario Moses and his people are pretty much Egyptianised, if not actually Egyptian (p239).  Hence the desire to worship the bovine goddess Hathor when the Israelites encounter a shrine dedicated to her at Serabit el Khadim in Sinai.  And hence the reason why the mythical Ark of the Covenant so closely resembles an Egyptian Barque (p242).

Contrasting with this is John Ward's strand which is set into a different timeframe.  His thesis is built upon a disaster scenario where the normal annual Nile flooding takes on disastrous proportions one year, destroying the townships where the immigrant Hebrews made their homes.  Lack of archaeological evidence for such an event is understandable, argues the author, as basically it would all have been swept away.  So, his ideas about Exodus are based upon a chaotic aftermath where a now homeless, demoralised nation of immigrants must beat a retreat to Palestine.  Ward's writing is romanticised, but no less convincing for that.

Early in the book, the authors outline the Semitic nature of the Hyksos rulers of Lower Egypt during the 15th Dynasty of the Middle Kingdom, and how one of these more peripheral figures in Egyptian history might have been the Biblical Pharaoh.  This would explain why the Hebrew settlers were allowed to establish themselves in the Nile Delta region, he argues.

Essentially, the Exodus was due to local Semitic politics within a Hyksos-dominated region of Lower Egypt.  This neatly explains why there's very little to read about it in any ancient Egyptian writings (except perhaps the 'Admonitions' (p125-6) which bear an uncanny resemblance to certain Biblical passages, and the Mosaic tone of some passages in the Book of the Dead).   These early discussions, which I think are attributable to Dr Ward, quite sensibly accommodate the internal politics of Semitic settlers occupying northern Egypt.

By contrast, Ward's later arguments about who Moses was focus upon the 18th Dynasty royal court of Amenhotep III, based in Thebes.  I've read Chapter 9 a couple of times now, and I'm still confused by whether Ward thinks that Hapu is Moses, or whether he means his son Amenhotep.  Although the actual chapter title is "Amenhotep, Son of Hapu: The True Moses", the focus of much of the ensuing narrative is about Hapu, including a long discussion about him living to be about the same age as the Biblical Moses.

Which means that Hapu/Moses was born in 1440 BCE.  Yet, Ward writes of Amenhotep, Hapu's son: "Born in the city of Athribis in 1440 BC in the south of Ancient Egypt, his mother, Idit, later became a Hathoric priestess known as "Hathor Idit, the justified".  His father, Hapu, was referred to as "The living Herald Apis." (p172)

So was Moses Hapu, or his son Amenhotep?  It was as clear as mud to me.  Eventually, I settled on Hapu as the intended Moses; that Ward's inclusion of his son Amenhotep was some kind of mix-up with the Pharaoh of the time.

I preferred the ideas about the Semitic Hyksos, to be honest.  It seems likely to me that the Exodus was indeed based upon an historical event, but one that was somehow set to one side of Egyptian history.  In other words, it didn't take place in the heartland of ancient Egypt, but at its periphery.  So, the reason why the Biblical Pharaoh isn't named is because he was just a local tribal leader of the Hyksos people which were occupying parts of northern Egypt.  Exaggeration down the generations elevated him to the real Egyptian Pharaoh in the minds of the Israelites, which served to enhance their own world view of their importance in the great scheme of things.

This isn't really what the authors proposed, but it's what I ended up concluding from the plethora of varying ideas they offered.  For me, I obtained new insights into how the story of Exodus fitted into the complexities of the region's geopolitics - insights which, ironically, were facilitated by the rather odd, Janus-like format of this book.