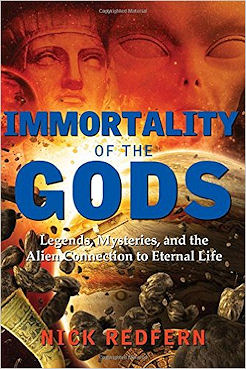 Subtitled "Legends, Mysteries, and the Alien Connection to Eternal Life"

Is it so ridiculous to imagine that our ancestors were visited by hyper-advanced beings from space?  It would be entirely natural for them to consider such beings to be gods.  It's not just the 'magical' technology on view, their level of knowledge, or their awe-inspiring presence.  Perhaps these visitors were indeed effectively immortal.  In the last decade or so, futurists have begun to seriously consider a world where aging is eradicated - or at least seriously curtailed.  Gene therapy, cloning, stem cell research, advances in medicine - potentially a potent brew of treatments which might, together, offer a fabled fountain of youth to Humanity. 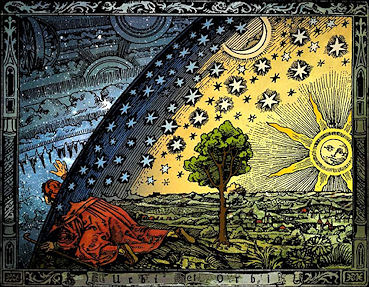 As Nick Redfern argues in his latest book about the ancient gods and their alien connection, if interstellar space-farers were just a few centuries more advanced technologically than us, then it is quite reasonable to imagine that they had already cracked aging.  Indeed, one might even add that extending lifetimes considerably would be a mandatory requirement to interstellar exploration, given the timescales involved.  In other words, the very presence of spacecraft in our ancient skies millennia ago implies that the pilots are effectively immortal.

But ... we're jumping ahead of ourselves.  Firstly, what of the evidence for such a contentious claim?

Nick Redfern jumps straight into the turbulent  hotbed of ancient alien research, and its controversial literature.  To his absolute credit, he gives Zecharia Sitchin's work the serious analysis it deserves.  He provides a good comparative study of Sitchin's work alongside other authors like Lloyd Pye, Laurence Gardner, Erich von Daniken and Philip Coppens.  This leads to a wide-ranging discussion of the nature of the Anunnaki - the deities of ancient Mesopotamian cultures, thought by many of these authors to be ancient astronaut visitors of immense life-spans who colonised the Earth in ancient times.  The existence of the Anunnaki provides a template for concepts of immortality among gods and demi-gods in subsequent cultures, like Egypt (p99) and Greece. 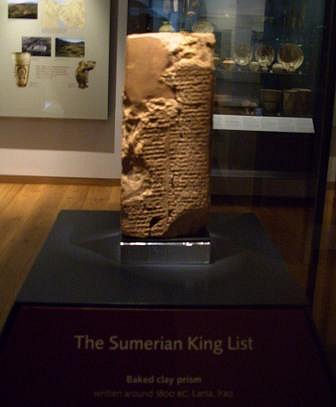 What was the secret of their longevity?  Legends about the gods from various cultures provides plenty of possibilities: manna, ambrosia, nectar, white powder gold, the fountain of youth, and so on.  Essentially, Redfern's assertion is that ancient literature is replete with references to legendary edible substances which massively enhance life-expectancy.  So, perhaps there's some truth to this, he wonders.

From there, Redfern contemplates the impact such myths may have had upon the Biblical stories of the Old Testament, from a Ufological perspective.  Contained within these passages is a description from The Book of Enoch which, I would argue, described a visit to the Dark Star system; an idea I expand upon in this month's blog (https://www.andylloyd.org/darkstarblog47.htm).

The author is particularly interested in the extended life-spans of the Biblical patriarchs, and whether this is connected to the genetic manipulations carried out upon humans by the Anunnaki (and their strange presumed colleagues, the Greys).  He doesn't mention the Sumerian King Lists, which was a shame because that directly ties the issue of ancient longevity to the Mesopotamian deities of old.

What he does explore in some depth, however, are the historical accounts of allegedly immortal individuals living among humans, like the Count of St Germain, or Ufology's Valiant Thor .  He points out that many of these accounts of legendary men (and they do all seem to be men) include occasions of special food being offered or taken (p122-3), seemingly tying these accounts in with more ancient immortalizing nourishment of the gods.  If these characters have an alien, or Anunnaki origin, then they appear remarkably human, which indicates that they are either some kind of hybrid, or that we were very much created in the Anunnaki image!

It's not clear whether one or more of these characters had anything to do with the conspiracy theory about the invasion of Iraq that Nick Redfern then discusses.  Essentially, it is alleged that the chaotic arrangements around the safeguarding of the ancient treasures of Baghdad museums were purposeful, and that some of the looting raids which occurred in the immediate aftermath of the 2003 invasion were pre-planned 'insider jobs' carried out under cover of the chaos.  Instead of WMD, the really hunt was for the key to ancient technologies.

If this was indeed the case, then the kind of invaluable data gleaned from the Baghdad Museum's archives would have been music to the ears of scientists working for the Raelian movement.  Redfern provides a comprehensive overview of this unusual organisation, and their extremely serious plunge into the world of genetic research and, more controversially, human cloning.  Their guiding philosophy, based upon the Contactee experiences of their controversial founder Claude Vorilhon, is to create a rolling programme of clones as a never-ending series of duplicates.  Somehow in this process, when the clone has reached maturity, the Raelians believe that "..the mind, the personality, and even the memories of the original person will be transplanted into his or her clone." (p179)  Good luck with that!

Another organisation seriously attempting to achieve immortality for their members is the Transhumanist Party, based in California.  The author does a wonderful job of navigating the various ethical strands thrown up by these quasi-scientific missions to create super-humans.  Perhaps if our DNA really was manipulated by the Anunnaki, or even contains some of their own genetic material within it, then there may be pathways within our own biology towards their enhanced longevity.

"We are not limited to 80, 90 or even a century.  Survival is solely down to science - science that the Anunnaki shared with certain humans and for nor other reason than it served a purpose in relation to their long-term agenda on Earth.  But unfortunately for us today, it is science that has been lost, deliberately buried, or forgotten.  Unless, that is, we one day stumble upon it or the extraterrestrial gods return and share it with us, as they did to a degree in biblical times." (p199)

Although, as I have often argued, there may be an environmental factor at play here, too:  The general assumption that the Earth is a naturally safe place for biological life may be misplaced.  Our very proximity to our bright yellow star, and the heavy daily shower of harmful high-energy rays which it sends our way, may be the reason why our life-spans are so much shorter than the 'gods'.  Better, then, to reside on the peripheries of a star system, safely at arm's length from the powerful, deadly Sun.  This is one of the essential points raised by the Dark Star Theory (2).

The prospect of discovering the secret of immortality brings up many ethical issues:  What would our world start to look like if our lifespans were to extend out exponentially, either through medical and scientific breakthroughs, or other less orthodox 'fixes'?  Redfern contemplates some of the downsides of this seemingly wonderful development:  Boredom, overcrowding, a need to drastically reduce human reproduction, a 2-tier system of elite human 'gods' alongside the rest of us mere mortals.  Then there are further considerations of resources, economics and purpose.  Would the whole understanding of what it means to be human change?  Without death, would life's experiences lose their vibrancy, their immediacy, their profundity?  In the face of such issues, is such a change even welcome?

'Immortality of the Gods', as a book, improved as it went along.  Perhaps because much of the first sections of the book were very familiar to me, I took little from it initially.  But, as ever, the excellent Nick Redfern came through with some engaging insights, intriguing stories and thought-provoking debate.