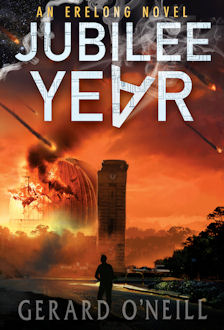 This is a survivalist novel set in the Australian outback featuring some highly accessible paranoia.   The main apocalyptic theme embraces the concept of an in-coming Dark Star system, drawing upon multiple influences from the Planet X genre - not least my own Dark Star contributions down the years. The resulting book contains several similarities with my own first novel 'Ezekiel One'.  We both drew upon similar themes in our writings, although ultimately the direction of travel of the novels is very different.

The main protagonist, Storm, is a highly pragmatic young man from relatively humble origins who finds himself swept along initially by the normal family, work and girlfriend issues.  The author does a fine job filling out Storm's life is small-town Australia - an oasis of normality, like an eye in the storm as events rapidly develop all around them.  The only oddity in the area is an imposing astronomical observatory, run by an academic who realises what is really going on.  Like Luke Skywalker before him, Storm's boredom with life in the boonies soon gives way to trouble.  Storm and his no-nonsense girlfriend, Penny, find themselves swept up in a political protest which gets nasty, culminating in internment, as Australia's democracy gives way to a police state.  But the desire for government control proves senseless as the world succumbs to a harrowing, extinction-level event which sweeps all before it.

Storm embarks upon a desperate fight to survive against all the odds, as the world as he knows it faces total destruction.  He experiences these end days amongst an eclectic group of folk, thrown together by events beyond any of their control, and, despite his youth, Storm valiantly leads them towards relative safety.

There is plenty of gritty action throughout, with some engaging and well-rounded characters, and what appears to be a realistic immersion into life in the Australian outback - complete with its sometimes impenetrable slang.  But perhaps O'Neill's best writing is reserved for his vivid descriptions of environmental changes and extreme weather events, as well as nature's response (reactions of wildlife, etc).

The reason for the destructive wave enveloping the world, as hinted at by the book's cover, is complex.  The threat to Earth comes from a system of Planet X-style bodies which are truly phenomenal in both their scale and destructive power.   Yet, despite the sheer magnitude of this incoming event, the world remains largely ignorant of this system of objects prior to its arrival.  How?  The author weaves a grand conspiracy of government secrecy and cover-up, and deploys some rather clever environmental tricks to hide what should be glaringly obvious to anyone taking the time to look into the sky.  Astronomers who notice that something is afoot are duly taken care of with extreme prejudice.

The coming events are realised only by an elite few who pull the government strings.  One of these characters, who clearly wields immense power, makes contact with the young hero of the story for reasons which are not entirely clear (again, shades of Star Wars).  This takes place before a backdrop of rising violence and civil disorder, some of which appears to be brought upon by government agents.  The role of this mysterious, possibly alien character in all of this is unclear - loose ends which will no doubt be tidied up in the sequels.

Throughout the book there is a grim sense of impending doom, exacerbated by a stealthy, and darkening government response.  Although the action scenes create pace and menace, which helps to make the story quite gripping, the actual chain of events is presented in a very haphazard way, giving a disjointed feeling to the book.  It needs editing to make the book flow better, as well as to iron out some typos, and I am given to understand by the author that a re-working of the story to this end is already underway.  That's great news, because this could be a very good novel, particularly aimed at older teenagers, as well as readers with a general interest in conspiracy and, specifically, the Planet X subject.

Some of the dynamics of an in-coming solar system object are unrealistic in the opinion of this researcher, but the general thrust of the book is engaging and should prove thought-provoking for anyone who has yet to consider the possibility of an exotic companion object to the Sun out there somewhere.  I look forward to reading what happens next, and discovering the true identity of the enigmatic tall man!

Update: The second book in the Erelong Trilogy, titled 'May Day', was published in 2017.