Remnants of the Gods 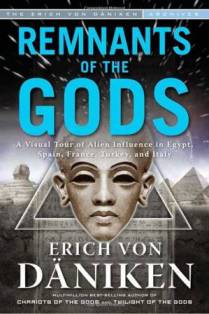 This is the second book in a series featuring photos and analysis from Erich von Däniken's field studies of ancient sites.  The journey starts in North Africa, and takes in megalithic sites in several European Mediterranean countries, culminating in a close look at the latest news from the Giza Plateau in Egypt.  As far as I can make out, Herr von Däniken wrote the book in English, as there is no translation credit.  If that's the case, then hats off to him, because the prose is pretty good throughout - perhaps aided by some meticulous tidying up by editor Diana Ghazzawi?

Lesser-known North Africa's ancient sites may be overshadowed by Egypt's incredible monuments, but nevertheless provide a fitting start to our tour of megalithic constructions.  As is common all over the place, it seems, supposed tombs are built of massive stones which were transported and carefully placed against all the odds by a Stone Age people devoid of technological savvy.  An example in Spain's Cueva de Menga includes a ceiling slab weighing some 180 tonnes.  Another Spanish site, also named 'Menga', provides a further mystery - lines deeply imprinted into stone ground, like tramlines.  Similar entrenched lines appear in Sardinia and North Africa, providing a broad geographical sweep for this phenomenon.  Are they natural, or man-made?

So, to Malta, where we encounter the subterranean complex of Hypogeum.  The photos show a remarkable, elegant megalithic interior which is not easily accessible to members of the public.  The stones that make up the underground structure must have been worked with tools at least as strong as flint, the author argues - but no natural materials with the toughness of flint are available on the island.  The structure itself bears little similarity with other megalithic sites, due to its fine, careful contouring.  Perhaps, this merely indicates what all these ancient sites were once like, before millennia of weathering and erosion above ground took their natural toll.

Taking us next to Turkey on this whistle-stop tour, the author speculates about the Biblical patriarch Abraham's link to the very ancient site of Göbekli Tepe.  Citing Abraham's apparent description of a flight into space above the Earth, von Däniken sketches out the case that the Patriarch's father, Baruch, lived alongside the ancient Turkish site, and that the two are somehow connected.  The book needed more substance here than the rather short notes provided, but it is an interesting strand of argument.

Having briefly toured the sites, the author then provided an overview of various theories advocating geometrical relationships between various holy sites of antiquity across Europe.  He was covering familiar ground here, including studies by researchers Peter Hentschel, Karl Bedal, Xavier Guichard and Theophanias Manias.  The bottom line in all these ideas is that a geometrical pattern was central to the arrangement of megalithic sites, long before Euclidean geometry was formulated.  If those premeditated arrangements could be established beyond doubt, then how was it even possible to locate these sites with such precision without modern surveying techniques, particularly given the vast distances and problematic terrain involved?

Sceptics would no doubt argue that such patterns are simply modern imaginative constructions, and merely coincidental - that perhaps the geometrical arrangements of MacDonalds restaurants across the modern landscape could similarly provide esoteric food-for-thought?  Nevertheless, the 'coincidences' are indeed intriguing and, given the ability of the ancients to defy logic in their choices of monumental building materials, we perhaps should be cautious before dismissing their ability to overcome other such challenges, be they in surveying or mathematics.

Of course, the author's central premise is that the ancients had some help, from visitors far more advanced in these matters than they were.  Visitors, he argues, who continue to monitor us from above, travelling in and out of our skies with impunity.  Our authorities stick their heads in the sand, with knee-jerk denials, as Erich von Däniken castigates passionately here:

"But is it not precisely the large nations that have closed their UFO offices?  Is it not the Americans and British who no longer want to spend money on the registration of stupid, useless UFO documents?  Correct!  The real reason for this action is not, however, the reason which the public is fed.  It is not about a lack of credibility among the witnesses, not about the lack of interest in the media, not about the unscientific nature of the whole subject, not about the validity of the documentation, including numerous film and radar documents.  It is, plain and simple, the recognition that we human beings cannot do anything about it; an admission of our total impotence with regard to the UFO phenomenon.  What is there to tell the public?  You are all under surveillance?  We are the inhabitants of a global zoo and totally impotence against our keepers?"  (p109)

The culmination of the book lies in the mysteries that continue to puzzle us all about many ancient Egyptian monuments.  Before providing his commentary about these monuments, the author takes a short but, to my eyes, important diversion into a controversial translation of the Sumerian "Temple Hymns of Enheduanna", written about 2300BCE.  He discusses translations by Dr Hermann Burgard, who "studied Sumerology for decades, who can read cuneiform writing in the original and who knows the ancient texts and their interpreters..." (p121).

The author notes how Dr Burgard's translations of the Temple Hymns openly discuss "ramps for flying machines, production of fuel, storage rooms for fuel, terrible explosions in which hundreds of people died, flying machines rising into the heavens, spaceships in orbit, radio traffic, refinement of scrap metals and metal alloys for flying machines." (p121)  This work has a lot in common with that of the late Zecharia Sitchin, whose writings von Däniken's camp has consistently considered heretical.  Perhaps this explains the author's very next comment "This is not some amateur spinning a yarn." (p122)

Regrettably, my efforts to locate an English version of Dr Burgard's translation from Sumerian cuneiform into German has failed to come up with anything, so for now I'll have to take the author's word for it.  But I'm quite excited to hear of this independent work on Sumerian texts and its potential connection to ancient astronauts.

And so to the Great Pyramid, which covered much old ground.  The new thing for me was a somewhat oblique image of the tiny new pyramid chamber photographed by the ingenious Djedi robot (plate 157).  I was immediately reminded of the video game 'Portal'.  The author makes many excellent points about the glaring impossibility of it all.

This last month has seen news of further remarkable megalithic monuments coming to light, this time in southern Siberia.  I hope von Däniken's next book might include a look at these Russian sites which are proving just as puzzling as those of the Europe and North Africa.  The widespread prevalence of these monuments across the globe continues to cause wonder and raise awkward questions about our remote past.

Remnants of the Gods

Remnants Of The Gods