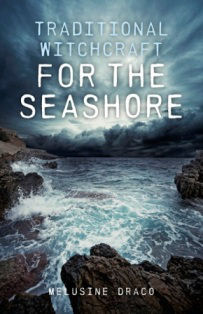 I recently heard a presenter on Radio 4 say something like "Of course, there weren't any real witches" as a throw-away line, as if assuming that the whole movement itself was something dreamt up by misogynistic religious nuts with pyres in need of human kindling.  Yes, the genocidal witch-hunters hated the old religion and drove it to extinction.  But there was actually an old religion there to destroy.  Gradually, that movement is re-emerging, mostly in the form of Wicca.  And what a wonderful thing it is - devoid of the dogmatic power-trips of monotheistic religions, immersed in science and folklore, and most of all promoting a  tangible connection to the environment.  Surely it is a religion for our times?  Yet it treads warily.  There is still much prejudice - even fear and loathing - aimed at witches, who are generally grossly misunderstood.

The 'Traditional Witchcraft' series provides varied information about what it means to be a practising witch in modern times.  In places, it feels like a guide, or self-help book.  But there is much more to it than that.  What strikes me is the amount of science running through the book.  To understand nature is to live as a part of nature, and ultimately to become one with its changing patterns and cycles, to synchronise one's own psychic or magical energy with natural tidal forces and the elements.  So a witch, like no other religious practitioner that I'm aware of, must study her environment carefully, and attune her life to it.

For a witch devoted to the sea and seashore, that involves learning much about the tides, weather, flora and fauna of the coastline, lunar cycles, as well as the folklore and myths of the sea:

"The world of the sea-witch is not confined to the shore and the water margin.  It is a multi-dimensional world of light and shadow, of reality and illusion, where we have moved into the subjective world of the spirit - a rich fishing-ground for those who trawl in these inner seas.  The Mystery is not within and around us.  By immersing ourselves in the world of myth and legend to such a degree, it has become as tangible to us as the 'real' world, forming a continual back-ground to our daily life." (p133)

The learning is multi-disciplinary, and feels almost as if one was studying a textbook written by a poet.  Yet the science collated in these pages is interesting, and pragmatic.  Intermingled with the factual information is much about rituals, superstitions, beach treasures to collect for magical means and, of course, spell-casting.  The witchcraft seems real enough - the engagement in the rituals and practice requiring as much faith as any other religion as to its efficacy.  The author warns against the use of black magic, but does not shy away from revealing some of its secrets.

Each witch finds their own path, and the sense here is mostly of a solitary journey rather than the work of a coven.  Indeed, many times the author cautions the reader about how to conduct her craft in public spaces so as not to draw attention to herself.  That wariness is still very much apparent, and after centuries of religious persecution perhaps that is wise counsel.  Yet, the old religion is never far from the surface even in everyday life - you just have to know where to look.  The book shows how seafarers and those whose lives depend on the sea cling to superstitions deeply entrenched in the old lore.  The crafts of sailors of yesteryear are closely related to the spells and rituals of the seawitch e.g. the tying of knots.  Witches, through their personal study and observation of the coastal environment, were able to attune themselves to the weather, and thus predict in-coming storms - very useful for local folk before satellite/computer based forecasting, but this was also a knowledge that created a sense of unease.  Knowledgeable women made the local patriarchs uncomfortable, of course - plus ça change.

Not everyone tuned into the sea can physically live near it, of course, and the book also provides advice for the budding sea-witch who lives inland, even in an urban environment.  Much information is provided on how to build a sea garden sanctuary, away from prying eyes, to conduct ritual and relax in. The tides still extend their reach inland, as science has shown through its study of the remarkable tidal recalculation made by inland oysters (p115-6).

'Traditional Witchcraft for the Seashore' is like a Radio 4 feature about witches - not that one could ever imagine that happening, or imagine a witch providing 'Thought for the Day' on the Today programme!  But it has that sense of quiet wonder about it, supported by education, knowledge and, above all, wisdom.