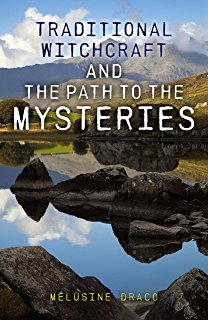 Mélusine Draco has written a series of books about the life of a practising witch, penned from the perspective of the British Old Craft as taught by Bob and Mériém Clay-Egerton.  Each of these books discusses the natural world that the witch immerses themselves in, and their fruitful symbiosis with the forces and rhythms of nature.  Those patterns may vary from person to person.  The witch might have a particular affinity with the tidal forces of the seashore, or the seasonal life-cycles of the hedgerows, or the social and cultural rhythms of an urbanised habitat.

It is likely that the witch is also a member of a coven.  This secretive and closed grouping of practitioners provides mutual support, and allows the witch to engage directly with her peers through their mutual rituals and rites.  That local network also provides a familiar set of routines, as well as a communion of like-minds within a comfortable social setting.

This particular book deals with a quite different stage of the witch's spiritual journey.  That quest is both an inner journey of exploration, but also a journey of renewal within nature itself - a communion with the natural forces, set within a harsher, more raw environment.  The witch who takes this path will find a greater connection to the elements and the the scale of natural phenomena.

However, this journey, voluntarily embarked upon, is a solitary one.  To undertake it, the witch must separate herself from her familiar social bonds, and take the road less trodden in search of enlightenment:  Choosing to undertake this path will likely be interpreted by fellow witches as a rejection of the orthodoxy of the Craft, and bring about expulsion from the coven.  The witch must break her carefully honed bonds and habits, set aside her familiar ritual paraphernalia, and depart into the unknown.

Success is not guaranteed.  Indeed, the urge to find the wisdom at the heart of nature's mysteries may never be satiated by its realisation.  The risks of separation may be all for nothing.  There are no established guidelines to follow.  For those who undertake this solitary adventure, Mélusine Draco has supplied this esoteric travel guide - to signpost, support... and warn.

But there is no set of rules or instructions to follow.  Instead, Draco wraps her wisdom up in nature's symbolism, and exercises from varied disciplines - science, Shinto, Zen, the occult.

There is a flow of creative energies available to be tapped within certain environments, and I recognised the author's description of the magic of the Malvern Hills from personal experience.  The light, and quiet majesty of this place often captures my attention when I drive up towards the hills from the Severn valley in Gloucestershire - a county itself adorned with many a wold and gentle green escarpment.  There is something about the Malverns which seems to gather together its own energy.

This symbolic travel upriver is the central narrative of the book.  It leads the witch from the familiar tides of the seashore towards an inner hinterland, climbing steadily to rougher and more barren landscapes.  Finally, the mountains provide stark and often lifeless features to explore and meditate upon.  Here, the waters become subterranean.  By plunging into the dark places beneath the rock, the witch realises her own initiation into the mysteries, emerging to find herself renewed spiritually.

There is much to suggest ancient mystery cults, as per the Eleusinian mysteries of the Greeks, in this book's journey.  But where these cults were, presumably, a social order providing initiation and fellowship, this neo-pagan path of mysteries undertaken by the modern witch is an isolated and personal affair.  The most sociable connection available is likely to be the archetypes of the collective unconscious - a plentiful source of wonder, but perhaps not so much of company.

Perhaps like considerations of death itself, the book does not shy away from the concept of loss and departure.  There is an ascetic edge to the philosophy, but without a promise of anything in return.  Faith in the natural forces at work (or even the Horned God) may be rewarded, but as the Buddhists may know, there is no defined path to enlightenment.  One may struggle against the river currents all the way to the metaphorical Source, only to get swept right back downstream again.

This undulating, uphill journey of the 'river witch' feels a melancholy affair.  But the rewards on offer are tangible connections to the powers of the landscape, transcending human worldly life.  There are hints in the book of the spirits inhabiting the natural wilderness whose timeless characteristics have survived the cultural churn of mythical and religious practices elsewhere.  The witch becomes a shaman of nature, absorbing and absorbed into the occult spirituality of nature.  But these offerings within the book are very broad-brush - tantalising hints of what could be; qualities which swirl within the space between natural science and poetry.

It is difficult to see whether there is a concrete objective truth to be sought out, or whether the book simply stretches into a poetic unknown of its own divining.  The book may not provide the answers with any great clarity (and does not pretend to), but its insights and wisdom are apparent enough with anyone who has eyes to see.  I was also touched to read passages from a previous review of mine quoted in the introduction, discussing one of Mélusine Draco's earlier books.  It appears that I have an affinity for her work and ideas, and perhaps traditional witchcraft more generally.  Perhaps there is some truth to that but, if that is the case, then I self-embarked on the solitary journey without ever entering the Old Craft proper.