One of the reasons why I became so interested in brown dwarfs back in the 1990s was their potential for life.  I had in mind a habitable environment on moon orbiting closely around an old, cold brown dwarf, potentially located in the outer solar system (1).  As time has gone on, it has become clear to me that there is a constraint on the upper limit of mass of such an object in the solar system, making a cooler sub-brown dwarf a possibility (if located far enough from the Sun), but not a 'proper' brown dwarf.  So, maybe a Nemesis-type object might be more like Jupiter than a smouldering failed dwarf star.  We're edging along the boundary between sub-brown dwarfs and giant planets here, where terms are not always well-defined.  They occupy the lowest (possibly below lowest) stellar class known as 'Y-dwarfs'.

Some people interpreted this interest in life around brown dwarfs as literally meaning life-forms within their own atmospheres.  Now, bear in mind that few people suspect that Jupiter itself might harbour life.  This is, after all, an enormous gaseous world whose depths must be extraordinarily highly pressurised environments.  Yes, our planet demonstrates the potential for 'extremeophiles' eking out a living in the harshest environments.  But the most extreme environments on Earth are surely mild compared to the depths of Jupiter where heat and pressure may turn its light atmospheric gases (mostly hydrogen) into metallic liquid oceans, before descending further towards a metallic rocky core. 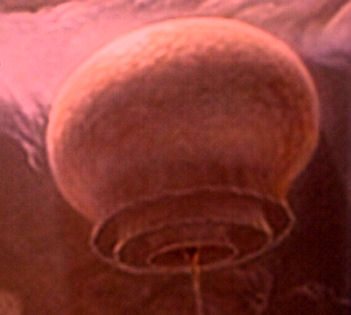 In the upper atmospheres, where the great Jovian storms swirl out their magnificent forms, conditions may not be quite so infernal. in 1975, the renowned scientist Carl Sagan, along with his Cornell colleague E. E. Salpeter, speculated on the kinds of life-forms which might - just might - be able to inhabit the clouds of Jupiter (2).  They envisioned an ecosystem of sinkers, floaters and hunters, all constantly battling the convection currents to prevent a plunge into the infernal depths of the planet (3).  Their speculative musings, and the science behind them, played a part in the highly popular 'Cosmos' series, brought to life by the artwork of Adolf Schaller.  As Sagan wrote:

"Physics and chemistry permit such lifeforms.  Art endows them with a certain charm.  Nature, however, is not obliged to follow our speculations.  But if there are billions of inhabited worlds in the Milky Way Galaxy, perhaps there will be a few populated by the sinkers, floaters and hunters which our imaginations, tempered by the laws of physics and chemistry, have generated." (4)

They determined that a thin, gas-filled organism (of vast proportions, in keeping with the planet's intense gravitational pull) might survive long enough to replicate if it could either survive in the incredibly cold Jovian mesosphere, or alternatively generate it own energy through photosynthesis, thus powering locomotion (3).  One of those problems would immediately be solved by cooler brown dwarfs, where upper atmosphere temperatures are warmer than Jupiter's own upper layers.  These immense planets have 'room temperature' layers.  The second issue would not necessarily be a problem for a brown dwarf orbiting a parent star, as it would itself be irradiated with UV light.  But what about a 'free-floating' planet, either in interstellar space or in the deep backyard of a star system?

A contentious new astrophysics pre-paper by academics from Harvard University considers whether life might exist within brown dwarf atmosphere (5).  Manasvi Lingam and Abraham Loeb (the latter has penned several speculative science papers in recent years) think the photosynthesis issue could be overcome:

"...we explored the prospects for photosynthesis on free-floating brown dwarfs. Despite the general paucity of photons, we hypothesized that photosynthesis could function via a multi-photon scheme with a maximum wavelength of ~ 2.3-3.0 µm, i.e., close to the near-IR outer boundary." (5)

They go on to argue that the new powerful James Webb Space Telescope should conduct spectroscopic analyses of cool brown dwarf atmospheres to seek tell-tale signatures of life. 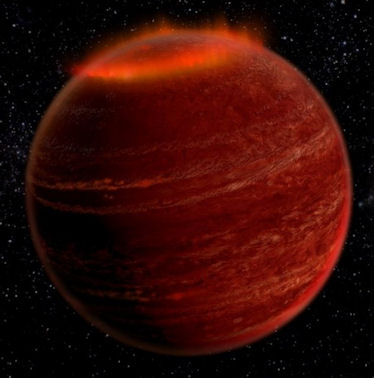 Before this paper, there had been little published work on the potential for life 'on' brown dwarfs, with the exception of Yates et al in 2017 (6).  This paper combined atmospheric modelling with biological, evolutionary modelling of simple organisms.  The researchers determined that only minute microbial life might be possible in certain types of Y-dwarfs, whereas those with strong upwards convection currents might support more ambitious life-forms:

"We assume a constant upward vertical velocity through the AHZ. We found that the organism growth strategy is most sensitive to the magnitude of the atmospheric convection. Stronger convection supports the evolution of more massive organisms. For a purely radiative environment, we find that evolved organisms have a mass that is an order of magnitude smaller than terrestrial microbes, thereby defining a dynamical constraint on the dimensions of life that an AHZ [atmospheric habitable zone] can support." (6)

This distinction between convection zones and radiative zones is important, but it literally goes deeper than that.  Brown dwarf expert Mark Marley has argued in no uncertain terms that there cannot be a habitable zone on a brown dwarf:

"...unless you are constantly evolving new life every hour on the hour there is NO internal brown dwarf habitable zone. None. You could ask anyone who studies these objects and they could tell you this... Some brown dwarfs have detached convection zones separated by radiative zones. You might think this would save you but the mixing in the radiative zone is still non-negligible. You can't hide from the deep, sterilizing, atmosphere." (7)

Case closed, it seems.  However, that is not to say that life could not exist in a habitable environment on a brown dwarf moon, as I originally proposed 20 years ago (8).  It comes with its own challenges for sure, but it's still more likely than life existing in a brown dwarf atmosphere, no matter how clement the prevailing temperature.

First Evidence for a Circumplanetary Disk

Planets are thought to form from rotating disks of gas and dust known as protoplanetary disks, which have themselves formed from the pre-solar nebula that from which the parent star was born.  Given that sequence, it is not too much of a stretch to imagine that the forming planets also have their own rotating disks of dust and gas which, in turn, generate their own system of moons.  The Galilean moons of Jupiter would be a good example of this - the implication being that the accreting mass of mighty Jupiter formed from a larger globule of swirling material whose leftover material seeded moons before it got the chance to slowly fall down onto the central planet. 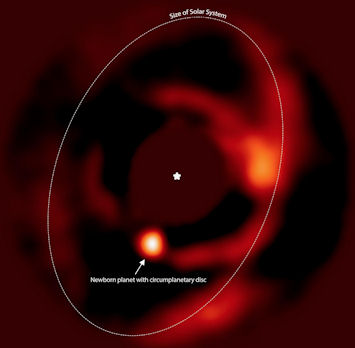 If this mechanism was true, then one would expect to encounter the phenomenon of Circumplanetary disks (CPDs) around certain very young exoplanets.  CPDs are disks of gas and dust believed to surround giant planets (e.g. Jupiter) when they are born. The disk becomes the birthplace of the planet's moons, prior to dissipating along with the rest of the star system's greater protoplanetary disk.  Such an effect would be difficult to observe, but an international team of astronomers think they've discovered the first CPD, around the star PDS 70b:

"The research team used the Very Large Telescope facility in Chile to obtain infrared images in different colours (wavelengths) of a newborn giant planet. “We found the first evidence for a disc of gas and dust around it - known as a circumplanetary disc,” said Dr Valentin Christiaens, [a Postdoctoral Research Fellow in Astrophysics at Monash University]. “We think the large moons of Jupiter and other gas giants were born in such a disc, so our work helps to explain how planets in our Solar System formed,” he said." (1)

The astrophysicists used the Very Large Telescope facility in Chile to obtain infrared images at different wavelengths, to determine the nature of the disk surrounding the new-born giant planet (2).  This feature is relatively transient in young star systems - partly explaining how difficult these have been to detect so far.  They interest me because I wonder whether they might be a more long-lasting feature around similarly-sized 'free floating' planets in interstellar space.  Without the dust-clearing mechanisms at work within the solar system, might circumplanetary disks feature more prominently among such rogue planets?  Regrettably, we may never know, because the light sources capable of illuminating such features in interstellar space are, by definition, marginal.  Infra-red detection would also be difficult within this low-temperature environment.  Nebulae are, after all, dark and cold places without newborn stars to illuminate them from within.

The OSSOS team, an international grouping of astrophysicists and astronomers working to improve our understanding of the outer solar system, has placed a new research paper into the public domain.  This paper describes the results of computer modelling to test the hypothesis that Planet Nine (in two different guises) is shepherding distant scattered disk objects beyond the Kuiper belt.  Inevitably, this is a very technical piece of work.  It seeks to constrain the possible properties of the proposed Planet Nine object, and critically examine whether it "does what it says on the tin".  OSSOS are generally sceptical of Planet Nine - although, naturally, this is all about the science. 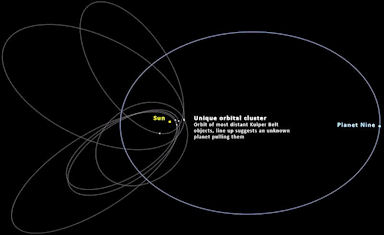 This paper is not quite as damning of the current evidence of Planet X as previous papers by the OSSOS team have been (lots having been said about 'observational bias', for instance).  In some ways, it even seems helpful, as the modelling does seem to come close to the observed clustering of the extended TNOs.  But, OSSOS find that the effect of a Planet Nine body (particularly a 10 Earth masses body with a semi-major axis distance of ~700AU) has too great a distorting effect.  Its orbit is too inclined, it seems:

“…we find that a lower orbital inclination (i = 5◦ ) for the distant planet may yield a scattering population that less strongly conflicts with observed scattering objects.  Such distant planet models will have to be developed and tested more robustly in future works.” (1)

What I find more tantalising, though, is the point they raise about the alignment (or otherwise) of Planet Nine with the ETNOs.  This may just be my reading of this, but their suggestion that variable perihelion distance may flip the stability of alignment might just be an important twist in the tale - literally:

"TNO perihelia between ~35 and ~50 AU.  However, for TNO perihelia beyond ~50 AU, our models predict the ώ asymmetry switches to favor orbits whose longitudes of perihelion are aligned with the planet, contrary to previous modeling efforts…. Sedna and 2012 VP113 should not be included as evidence for the same ώ clustering observed among TNOs with perihelia below ~50 AU.” (1)

OSSOS use this flipping of stability at the 50AU mark (roughly coincidental with the outer edge of the Kuiper belt) to argue that the two known objects whose perihelia lie beyond this point should be removed from the cluster.  For me, this may shore up my sense right from the beginning of 2016 that the 'aligned' direction is where those seeking Planet Nine should direct their efforts, not the anti-aligned direction.  But, again, I may be missing something within the rather heavy astrojargon.  I'll be interested to see how the Caltech team respond to OSSOS's new release. 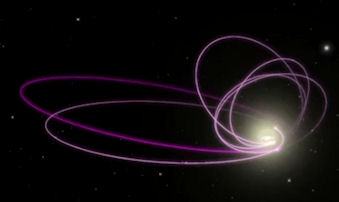 Nova PBS have released 3 short videos about Planet Nine, featuring Konstantin Batygin and Mike Brown from Caltech.  I would particularly recommend the second video about the evidence for Planet Nine:

On 4th June 2019, 1 had the pleasure of discussing all things Planet X with George Noory on the legendary Coast-to-Coast a.m. radio show.

MP3 downloads of both hours of the show are available to download here: