Astronomers from UC Riverside have discovered some new exoplanet super-Earths using the the Transiting Exoplanet Survey Satellite, or TESS, in a new star system named TOI-270.  The survey is powerful enough to provide some fascinating details about the three planets that have been identified.  Whilst one of them is rocky (TOI-270b), the other two are gaseous (TOI-270c & d), yet are only about twice the size of Earth.  These gaseous planets are about half the size of Neptune (1).  Although no example (yet!) of such a planet has been found in our own solar system, mini-Neptune super-Earths have been identified elsewhere. 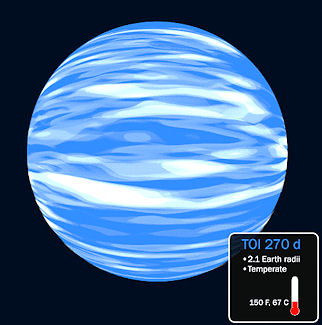 These new examples are of particular interest because they lie within the habitable zone of their system, and form something of a super-Earth exoplanet cluster.  because the star is a red dwarf, the habitable zone is located close to the star, and the planets swing around it between just 3 and 11 days (2).

It's likely that we'll learn more about them before long, as more powerful means of analysing their atmospheres and composition become available:

"Follow-up observations on the system have been planned for 2021, when the James Webb Space Telescope launches. It will be able to measure the composition of the TOI-270 planets’ atmospheres for oxygen, hydrogen, and carbon monoxide. ... these kinds of observations can help determine whether a planet has ever had a liquid water ocean, and whether any of the planets has conditions suitable for life as we know it."  (1)

This system may be a little gold seam for exoplanet hunters looking to study other planets with potentially habitable environments.  Not that a trip to this system will be happening any time soon - TOI-270 is located some 73 light years away.

These small, gaseous super-Earths may be equivalent to that of Planet Nine, albeit located in a very different part of their respective star systems.  The scientific paper setting out more details about these discoveries refers to these mini-Neptunes using the moniker 'sub-Neptunes'.

TESS has also been used to discover potentially habitable planets closer to us, at about 31 light years distance around the dwarf sun GJ 357. The planet, discovered earlier this year among a family of siblings, is also a super-Earth which orbits its star every 55 days:

"[Associate professor of astronomy and director of Cornell’s Carl Sagan Institute Lucy] Kaltenegger said this discovery will provide insight into Earth’s heavyweight planetary cousins. “With a thick atmosphere, the planet GJ 357 d could maintain liquid water on its surface like Earth and we could pick out signs of life with upcoming telescopes soon to be online,“ she said."

Moon Even Older than Previously Thought

"Studying hafnium and tungsten on the Moon are particularly important because they constitute a natural radioactive clock of the isotope hafnium-182 decaying into tungsten-182. This radioactive decay only lasted for the first 70 million years of the solar system. By combining the hafnium and tungsten information measured in the Apollo samples with information from laboratory experiments, the study finds that the Moon already started solidifying as early as 50 million years after solar system formed."  (2)

This takes the age back yet further from work carried out in 2017 on lunar zircon, which established an approximate date of the Moon's formation to be some 60 million years after the birth of the solar system (3). At this time, it is generally thought that the primordial Earth was battered by a Mars-sized planet - which some have names 'Theia' - causing an immense field of rubble to form and aggregate in orbit around the Earth.  Theia was an Earth 'Trojan', with an orbit similar to the Earth's.  This theory is known as the 'giant impact hypothesis'.  Other hypotheses for the Moon formation also do the rounds on occasion. 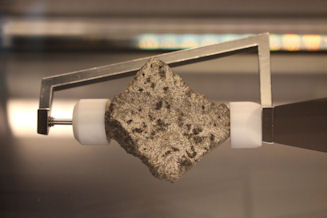 The resulting Earth-rubble (which presumably also features parts of Theia, too) went on to coalesce to form the Moon - a rather over-sized companion object in what essentially became a double-planet coupling.  Significant chunks of Theia are thought to lie embedded within the Earth, causing local but significant fluctuations in our planet's magnetic field.  It is possible that the 'South Atlantic Anomaly', which has been connected to magnetic poles reversals (4), may be influenced by remnants of the impactor planet Theia lying deep below the Earth's crust (5).

Now, as regular readers of this blog will know, I'm rather of the opinion that the Earth began life further out than its current location, towards the zone now occupied by the asteroid belt.  It would make sense that this region would be more prone to this kind of planetary collision, as the migration of more massive worlds beyond the Earth, as well as the swirling masses of dust from the protoplanetary disk, would make this zone more chaotic.  Bear in mind, also, that a separate and very prolonged period of chaotic violence was visited upon the solar system long after the formation of the Moon - during the 'late, heavy bombardment' from 3.9 billion year ago, or so.

It's hard to imagine given how mars seems to be a dry wasteland in our era, but evidence suggests that a massive impact which occurred about 3 billion years ago set off an immense 300m high tsunami across the red planet - possibly even two. 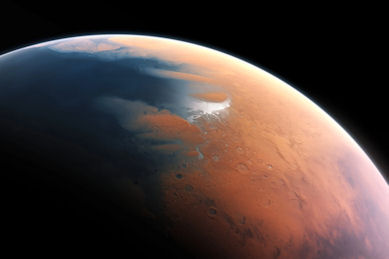 The geophysical features which suggested such an ancient event were first discovered in 2016, but recently these features have been linked to a possible crater where the catastrophic wave may have originated from (1).

"In 2017, a team led by François Costard, a planetary geomorphologist at the French National Center for Scientific Research, used computer modeling to reproduce the mega-tsunamis most likely to have created those thumbprint terrains. That narrowed it down to a handful of impact craters.  For the new paper, Dr. Costard and his colleagues examined these candidate craters and ultimately zeroed in on Lomonosov, which was likely forged by a 9-by-12 mile meteor in just the right place at just the right time." (2)

Incredible as this is, the ramifications for an ancient wet Mars may extend beyond the mind-wrenching imagery of such an event.  Many scientists consider the end of mars' early wet period to have occurred about 3.7 billion years ago.  This argued-for tsunami event appears to have occurred considerably later than this, implying that plenty of water was still hanging around at that point.  This adds to growing evidence that mars had water available on its surface much, much later than previously considered possible - perhaps within the last 1 billion years.

2)  Robin George Andrews “When a Mega-Tsunami Drowned Mars, This Spot May Have Been Ground Zero” 30 July 2019

Until fairly recently, scientists considered the Moon to be a dry desert environment.  The realisation that craters at high latitudes (i.e. near to the poles) contain water ice was a welcome surprise.  it complemented other findings about the generation of water in lunar soils across the surface of the Moon, which raised the potential for water being generated in situ by the action of solar radiation on the soils and sub-soil.  There appears to be a water cycle at play, where water is generated at the lunar surface and then fairly swiftly lost again to space, or diffused out to other zones.  This may imply the presence of water vapour just above the lunar surface - a very diffuse atmosphere of sorts.  The immediate lunar surface may be undergoing processes of continuous re-fashioning, leading to redistribution of water ice around its surface. 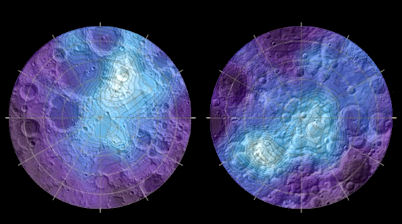 An opposing factor is at play in the craters: the water ice in polar craters remains hidden from the Sun's radiation, and so largely avoids this effect:

"The most enticing feature of this southernmost region is the craters, some of which never see the light of day reach their floors. The reason for this is the low angle of sunlight striking the surface at the poles. To a person standing at the lunar south pole, the Sun would appear on the horizon, illuminating the surface sideways, and, thus, skimming primarily the rims of some craters while leaving their deep interiors in shadow." (1)

Deep crater ice does not sublime off into space anywhere near as fast water ice that may have been located elsewhere across the surface, although the action of micro-meteorites likely chip away at even these deeply vaulted resources to some degree - as well as deliver potentially new sources of water from space.  The re-fashioning of the lunar surface appears to take place here, too (1).  These discoveries of frozen water on the Moon (sometimes enigmatically in the form of frost within the regolith, rather than blocks of water ice) have been partly responsible for increased interest in returning to the Moon, after a significant period of, frankly, disinterest amongst space agencies in our nearest neighbour.

It now seems likely that even recent estimates have fallen short of the quantities of water ice up there.  A study of the depth of 12,000 lunar craters, measured by the Lunar Reconnaissance Orbiter, has indicated a significant statistical difference between the high latitude craters and those in more equatorial regions.  The difference is likely to be due to the presence of significant infill of water ice into these craters, causing 'shallowing':

"We find that previously detected surface ice deposits in the south polar region of the Moon are spatially correlated with shallow craters, indicating that the surface ice may be exhumed or linked to the subsurface via diffusion." (2)

This effect is similar to that discovered for deep craters on Mercury which, amazingly, also contain water ice.  As far as the Moon goes, this updated set of survey results implies that the Moon holds some 100 million metric tons of ice in high latitude craters (3).

My painting exhibition at the Guildhall in Gloucester ran this month and went really well.  It featured some of my new work - a more creative and colourful style.  The paintings that sold were all in this new style, so that transitions seems to be the way to go. 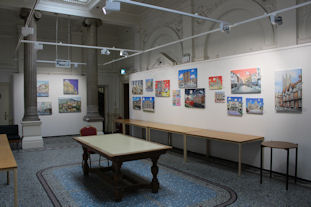 Here's the blurb from the exhibition:

"Gloucester artist Andy Lloyd presents new work in a mildly cartoon cubist style.  Andy’s usual sense of quiet realism takes on the influence of the contemporary French artist Alain Godon, whose wonky perspectives add a playful twist to townscapes.  The result is a quirky and colourful adaptation of local scenes and architecture from Gloucester, and beyond.   Andy’s style incorporates idiosyncratic expression that provides a readily recognisable style.  The work on show here spans over a decade, showing the steady emergence of the cartoon cubist style from a more realism-based oeuvre.  All of the work on show is painted in acrylics.  Andy Lloyd has been enjoying painting for about 30 years, no more so than when creating large, colourful murals." (1)

This summer I've also been involved in organising the 50th Art in the Park exhibition, in Cheltenham.  Although i didn't exhibit at the event this year (I couldn't have done both exhibitions simultaneously), I helped prepare the event, and the celebratory opening ceremony, which was a great success (2).  It's amazing to think that this popular annual exhibition has been going for 50 years, particularly as it is self-funded.  There are plans to re-landscape the part of Imperial Gardens that Art in the Park makes use of, so we will have to see what the future holds for this event.