A daring new theory about a massive collision in the early solar system is gaining traction in the scientific community. Its reliance upon a hefty planetary collision runs against the general grain of thinking, because such events are usually considered to be only remotely possible, on a statistical level (1).  Nonetheless, the evidence emerging from the spacecraft Juno's exploration of Jupiter indicates that something very significant disrupted the gas giant's core early on (2). 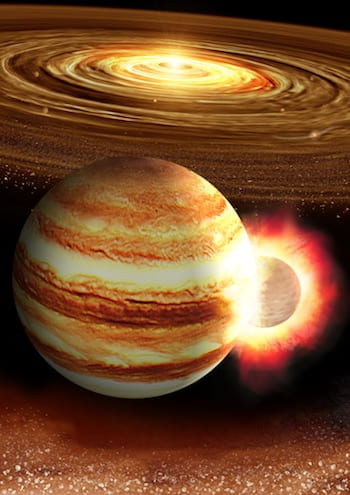 It transpires that Jupiter's dense core, crushingly compressed below it immense atmosphere, is not quite a neatly arranged as planet-forming models would suggest.  Instead, the core seems to be more of a nebulous melange of starting materials and atmospheric materials.  Something appears to have disrupted it early on - an event which had lasting consequences across the lifespan of the solar system. Cast your mind back to the impact of Shoemaker-Levy comets, and the grazing blows that the fragmented comets caused across Jupiter's upper atmospheric layers.  In no time at all, the giant planet returned to its normal appearance, although the impacts caused substantial changes within.  To disrupt the core itself, the impact would have to impact the planet's core itself - a direct hit by a body massive enough to survive the deep penetration necessary through Jupiter's deep atmosphere.  Not only would the impactor need to hit the central bulls-eye, it would also need to remain intact through its descent.  A planet about 10 times Earth's mass would be sufficient to the task, computer modelling suggests (2):

"...the collision scenario became even more compelling after [Shang-Fei Liu Sun Yat-sen in Zhuhai, China] ran 3D computer models that showed how a collision would affect Jupiter's core. "Because it's dense, and it comes in with a lot of energy, the impactor would be like a bullet that goes through the atmosphere and hits the core head-on," [Rice astronomer and study co-author Andrea] Isella said. "Before impact, you have a very dense core, surrounded by atmosphere. The head-on impact spreads things out, diluting the core."" (1)

The internal disruption to Jupiter would take literally billions of years to overcome.  Even 4.5 billion years on, the giant planet is still in a pickle deep down, Juno's data suggests.

Also, does this proposed event make Jupiter an unusual example of a gas giant?  The researchers involved in this work think that these kinds of catastrophic events may be more common than previously thought.  The immensity of these collision events may explain heat flares around young stars, where some of the starlight has been temporarily affected up by immense post-collisional debris fields orbiting the star (1).  Other scientists may be sceptical of these claims (even though they are backed up by some strong sets of numbers), but this new hypothesis may prove to have good predictive powers.  More so, it illustrates the very chaotic nature of the early solar system, and the high potential for planetary collisions during that time.

It's becoming clear that tiny stars can boast families of over-sized planets, running against the kinds of common-sense predictions about planetary system formation which have prevailed for decades.  The discovery of a Jupiter-sized gas giant around the red dwarf GJ3512 has opened a Pandora's box of possibilities (1).  There is now the very real potential for a whole new population of massive planets existing within tiny star systems. 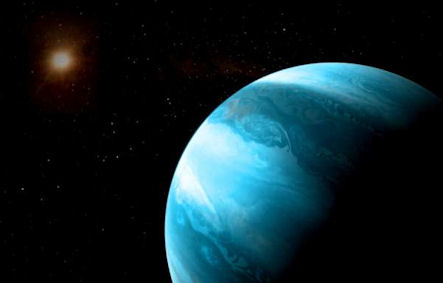 This discovery begs the question - how did this over-sized planet form in such a diminutive star system?

"[Lead author Juan Carlos Morales of the Institute of Space Studies of Catalonia] and his team maintain that gravitational instability in a young star's disk of gas and dust could, in some cases, result in the quick formation of huge gas planets—even when the star is minuscule." (1)

It seems that these massive worlds formed through a fast track process of accretion directly from the fledgling star's pre-solar disk.  Disk instabilities may be a better way of forming planets that had previously been considered possible.  The newly discovered exoplanet is about half the mass of Jupiter, and moves around the red dwarf parent on an elongated trajectory lasting just over 200 days (2).  This eccentricity may be due to the presence of another substantial planet, interacting with the gas giant. This may be just one world among over 4000 confirmed exoplanets to date, but it may have profound repercussions for our understanding of how massive planets form (3).

Coming hot on the heels of 1I/'Oumuamua (relatively speaking) is only the second interstellar object spotted whilst visiting the solar system.  This new object is on an extremely hyperbolic trajectory than the highly contentious object that preceded it two years ago, making 2I/Borisov unmistakably interstellar in origin (1).  Because this new object has been picked up earlier in its perihelion passage, there will be more time for astronomers to try to study it in detail (assuming it survives, of course).

1I/'Oumuamua raised many questions, not least of which was why observed changes in its predicted trajectory were at odds with its lack of visible coma, or tail.  This led some to suggest that this dark, elongated object might have an artificial origin.  Could it even be a comet, or was it an interstellar asteroid which had emerged from the inner part of another star's planetary system? (2) 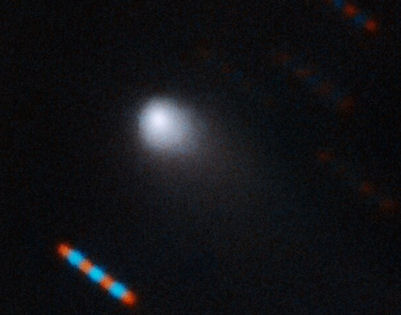 So far, besides its remarkably hyperbolic orbit (it's clearly flying through, rather than already caught up under the Sun's gravitational influence like all other known comets), 2I/Borisov is behaving itself, and looks more like a 'regular' comet whose size is probably 'just' a few kilometres across (3).   Unlike 1I/'Oumuamua, 2I/Borisov appears to be similar in nature to long-period comets belonging to the solar system, although closer observation over the coming months may change that view:

It emerged from the direction of of the constellation Cassiopeia, close to the galactic plane. The very fact that we're seeing interstellar comets at all is pretty remarkable.  The more we see, the larger the galactic population of these objects must be.  Which means that more of these objects are being discarded from their original star systems into interstellar space.  In other words, the local population of them seen over time provides a statistical basis upon which to judge how many objects there are out there overall.  Quite a lot, by the looks of things.