Tantalising radio wave signals emanating from our closest star, the red dwarf Proxima Centauri, have been getting studied by scientists since April 2019, a leaked report has revealed (1).  The scientists who discovered this exciting new 'Wow' signal work for the Breakthrough Listen project which monitors "the million stars closest to Earth in the hope of detecting stray or intentional alien broadcasts" (2).  It may be the best candidate yet of an intelligent signal from another world. 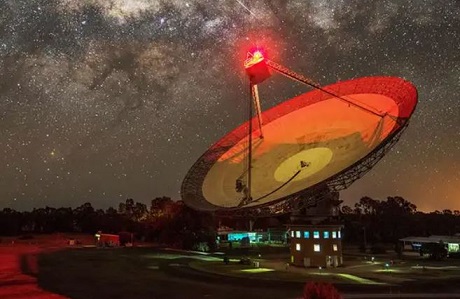 The 980 MHz signal was one of several picked up by the Parkes telescope in Australia in April and May last year, but has not been detected again since then.

"“The Breakthrough Listen team has detected several unusual signals and is carefully investigating,” [S. Pete] Worden [chairman of the Breakthrough Prize Foundation] tweeted. “The strongest and most persistent are all from Proxima.”

"The team detected several signals while examining data taken by the Parkes Observatory in Australia in a 2019 search for stellar flares from Proxima Centauri. Nearly all of the signals flagged by Breakthrough Listen’s algorithms as potential extraterrestrial beacons turned out to be from human-made technology like satellites – except for one.

"This odd signal lasted about three hours and was concentrated in a very narrow range of wavelengths – a range that is not generally used by humans’ satellites and spacecraft. It was the first signal to pass through Breakthrough Listen’s first round of checks, which are mainly designed to weed out signals from Earth. The researchers have named it Breakthrough Listen Candidate 1, or BLC1."" (2)

It's not just the fact that the BLC1 signal has uniquely made its way through the filtering process that has caused cautious excitement amongst many astronomers.  Intriguingly, the source of the signal oscillated around Proxima Centauri in a manner that suggested that it was coming from an orbiting planet.

"The signal reportedly shifted slightly while it was being observed, in a way that resembled the shift caused by the movement of a planet. Proxima Centauri has one known rocky world 17% larger than Earth, and one known gas giant." (3)

This rocky planet, Proxima b, is located within the red dwarf's habitable zone, although whether it could support life remains a contentious subject among astronomers.  Their main objection is the propensity for red dwarfs to emit significant stellar flares which may affect the surface of the nearby planet sufficiently to preclude the emergence of life there (4).  Nonetheless, warmth and the potential for liquid water hold great potential for life on this 4.8 billion year old rocky world. 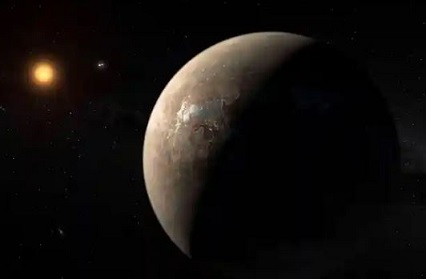 Scientists involved in studying the anomalous Proxima signal are preparing papers for publication, but were not yet ready to go public with their findings.  They are currently running further tests on the anomalous signal to determine whether, like the others, BLC1 is simply the result of human radio interference, or whether it may yet represent an alien 'technosignature'.  As things stand, they think the signal is from a human source, albeit an as-yet unidentified type of interference

"Read what we said! No one is claiming it’s A techno signature. We are in the process of following the agreed protocols. At this point we have some interesting signals we believe are interference but as of yet have not been able to track down the source." (5)

Even if the signal passes all the additional scrutiny, that's not to say that it can automatically be labelled as an intelligent alien signature.  There likely remain 'unknown unknowns' in the Universe's natural world, after all.  The main issue, however, is that this was a singular rather than repeating event.  Science seeks reproducibility -  a central problem with the study of paranormal phenomena or UFOs.  Without reproducibility there is little chance to make predictions about when a given phenomenon will occur again.  If the BLC1 signal was indeed alien, and sourced from Proxima b, then why did it stop?

This year, we've become used to the speed with which science can prove capable of quickly adapting to tough new challenges.  This story is a reminder of the more usual system of slow, methodical checks and ultra-caution invoked by those with access to scientific data.  Perhaps the 18 months of secrecy preceding the leak to The Guardian reflects that frustration, and catalyses some action.

Using the Hubble Space Telescope, astronomers have identified a far-flung exoplanet which provides a good precedent for a possible Planet X body in our own solar system.  The 11-Jupiter mass planet was first identified in 2013, but its strange orbit has only now been plotted using observations from the HST.  That orbit extends well beyond the young star system's protoplanetary disk.  Yet the gravitational pull from the distant planet HD 106906 b is sufficiently powerful to have shaped the disk from afar. 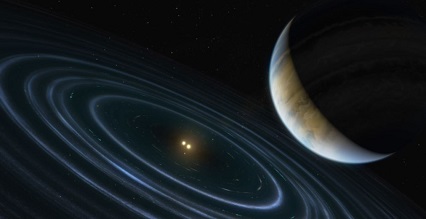 Not only does the wide orbit provide a precedent for a Planet X body here, but the relative youth of the star system (HD 106906 is only 15 million years old) clearly demonstrates that such a planet can take up residence beyond the normal planetary zone during a very early stage of the star system's development.

""This system draws a potentially unique comparison with our solar system," explained the paper's lead author, Meiji Nguyen of the University of California, Berkeley. "It's very widely separated from its host stars on an eccentric and highly misaligned orbit, just like the prediction for Planet Nine. This begs the question of how these planets formed and evolved to end up in their current configuration."" (1)

The 100-year old Planet X debate has been dominated in recent years by the theoretical potential for a super-Earth body thought to be located over 500AU away (2).  Fascinatingly, HD 106906 b is a rather more substantial proposition - a true behemoth of a world.  Its mass is more akin to a brown dwarf object, albeit one that lies a little below the mass threshold for stellar self-ignition. 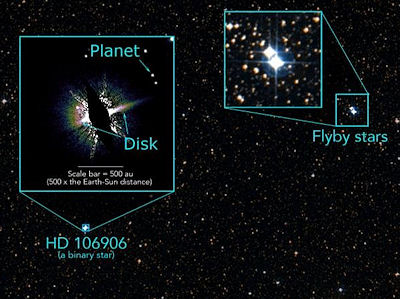 It lies some 730AU from its parent binary stars, taking some 15,000 years to orbit around them.  Its orbit is 'misaligned, elongated and external' to the young stars' debris disk, which is itself rather unusual in appearance.  The distortion includes an asymmetric packing or dearth of material around the outer reaches of the disk, thought to have been moulded by the regular approach of the planet during its perihelion passages (at a staggering 510AU (3)).  Again, on an orbital level, this reflects scientific thinking about Planet Nine and its potential gravitational influence upon some outer features of the solar system.

Scientists continue to consider the various means by which such a planet could end up in such an orbit so early on in the parent star's life (4), but what is now clear is that it absolutely can.