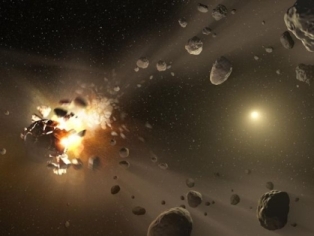 When writing a non-fiction book in popular science, you hope that you cover all the available ground before publishing.  It's next to impossible to achieve this when writing across the swathe of disciplines that make up the Dark Star research.  There will always be something which pops up after the fact.  This particular news piece came out in 2018 (1).  I do wish I'd seen it back then - it would definitely have found its way into Darker Stars (2)!  My friend and colleague Lee Covino dug this out recently - it fits well with the Sitchin-themed view of the origin of our Earth.

We both 'believe' that the Earth started out where the asteroid belt is now.  This view is based upon our readings of Zecharia Sitchin, who offered a rather quirky interpretation of our solar system's cosmology based upon ancient Mesopotamian texts (3).  He argued that ancient cosmology placed the Earth between Mars and Jupiter until it was knocked out of place by a usurper planet, often known as Nibiru (or Planet X).

I enjoy the challenge this idea offers to mainstream thinking.  In the many years I've written about this, astrophysical theories have progressed - as science does - and the idea of planetary migration has become much more acceptable.  The Nice Model has it that the great planets in our system jostled backwards and forwards as the primordial dust and gas disk dissipated (4).  In recent blogs, I've highlighted current thinking about an further inward migration of planetessimals in the inner solar system (5).  This drift of materials (still laden with water ice) then formed the inner planets.

Lee and I go further.  We think the Earth initially formed about 4AU away, was impacted early on by a neighbouring planet (astronomers call this Mars-sized impactor 'Theia') to form the Moon (Sitchin's 'Kingu'), and was later knocked out of its orbit by a rogue planet (Sitchin's Nibiru/Marduk).  It migrated inwards to its current position and the rogue planet was tossed out into the fringes of the outer solar system ('Planet X').  The debris from the collision formed the asteroid belt.

Interestingly, according to recent computer simulations of the 'Theia' collision (6), the Moon may have formed within just a few hours:

"Most theories claim the Moon formed out of the debris of a collision between the Earth and an object about the size of Mars, called Theia, coalescing in orbit over months or years. A new simulation puts forth a different theory - the Moon may have formed immediately, in a matter of hours, when material from the Earth and Theia was launched directly into orbit after the impact." (8)

That little nugget aside, the jigsaw of what bit of the solar system came from where relies upon forensic examination of chemicals and metals on planets, moons, asteroids and comets. It's not just their relative composition, but also the isotopic constituency of the elements in the different bodies.  Sometimes there's a match, sometimes not.  The outer belt asteroids and Earth share the same watery fingerprints, for instance.  Which is kind of weird.  Everyone expected the comets to be the bringers of Earth's water.

In the 2018 piece I mentioned earlier, it's rare metals in the planetary mantle that take centre stage.  The work is predominantly about Mars and the impacts it seems to have suffered early in its history.  But there's also some discussion of Earth, in a similar vein. It turns out there is an over-abundance of rare metals in the Earth's mantle which, according to theory, should mostly have drifted inwards to the core (these metals are 'siderophiles' and like hanging out with iron) (8). 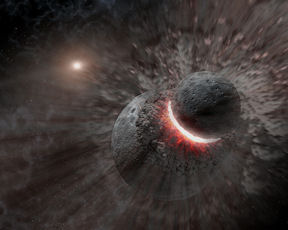 "...Earth has more siderophiles in the mantle than it should... The scientists explained this by showing that an impact of a lunar-sized body on the Earth (in addition to the event that formed the moon) would have enriched the mantle with enough siderophiles to explain the current value." (1)

What is really interesting is that these scientists are talking about a second early impact - in addition to the impact that formed the Moon.

The second impact event described here opens the door to Sitchin's  Nibiru/Marduk event.  This is because 'Kingu' (or the Moon) may already have been in place at that time, following the Theia impact. If the Earth was in the asteroid belt location with the Moon already orbiting it, and it was then hit by another small planet or large moon (Marduk's 'North Wind' in Sitchin's account (7)), then that colossal impact could have triggered Earth's inwards migration.  After all, Sitchin's rogue planet was sizeable and, therefore, capable of 'perturbing' the Earth's orbit during that encounter.

I rather wish I had read this article before completing 'Darker Stars' (8).  Although it isn't a smoking gun, the evidence for a second massive planetary-scale impact on the early Earth does sit rather nicely with Sitchin's 'Celestial Battle'.  If true, then the rare metals in the Earth's mantle originally came from interstellar space.