This website has argued for years that the evidence in the solar system increasingly points to a migrating Earth scenario.  It seems, on the face of it, to be a rather far-fetched idea.  As with so many things, we take the Earth's stability for granted, when in fact its history is pock-marked with catastrophe and monumental change.  We assume that the Earth was formed at the same distance from the Sun and has stayed there ever since.  But why should that be?

It is said that extraordinary claims require extraordinary evidence.  The evidence for the early migration of the Earth (or possibly the Earth/Moon binary system) takes the form of the water in various parts of the solar system. This water, which consists of a mixture of isotopes, carries its own signature, which various according to where in the solar system the water first formed.  Similarly, isotopic signatures can be derived from the elemental composition of rocks, helping scientists to slowly piece together the puzzle of the early solar system.  Results are proving surprising. 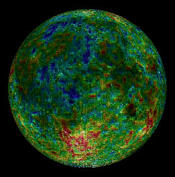 The arguments involved become complex (and I have tried to do them justice in my book Dark Star, as well as on in-depth analysis on the Dark Star Theory website) but the picture that emerges from the evidence is that the water on Earth and the Moon is unexpectedly abundant, given how close they are to the Sun, and that the idea of water being brought to the Earth and Moon by comets is an insufficient explanation for what we see here.

I have therefore argued that the best explanation for what we see is that the Earth system initially formed where the asteroid belt is currently now, and migrated in to its current position following an early catastrophic event (involving the Dark Star).  The more distant location for the early Earth provides us with a strong explanation for why the Earth has so much non-cometary water on it: it was too far from the Sun for the early solar heat to have driven the volatile water off.  Such a scenario is in keeping with Zecharia Sitchin's theories of where the Earth formed. 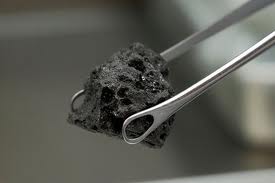 Further grist for this particular mill is now provided by recent studies of moon rocks which, when combined with the newest theories of Moon formation, lead the scientists in exactly the same direction.  Here's the quote from New Scientist:

"So if the moon's water came from Earth, where did Earth's water come from? The impact that formed the moon happened within about 100 million years after solid bodies began to form in the solar system – an eye-blink in astronomical timescales.  [Alberto] Saal [of Brown University, R.I.] doubts that Earth could have accumulated enough water from asteroid strikes in that time.  "The implication, although I cannot absolutely prove it, is that probably the Earth formed with water," he says. The trouble is that our planet is currently too close to the sun for it to have retained water as it coalesced from the swirling disc of material that was to become the solar system.

Saal thinks that Earth may have formed near where the asteroid belt is now, which is far enough from the sun for water to condense. The planet would then have migrated inward. It'll be a tough theory to prove, because Earth's geologic activity has been recycling rocks, and thus erasing the evidence, for billions of years. That's what makes moon rocks so valuable.

"All that we know now is because we have a fossilised record of what happened 4.5 billion years ago on the moon," says Saal. "We couldn't get that conclusion from looking at the Earth." (1)

It appears that the interior waters of the Earth and Moon have the same source (2), leading to the conclusion that they were always there from the beginning of the life of Earth.  I would imagine, then, that should the Inward Migration Hypothesis be correct, then we should find similar water compositions among the asteroids in the main belt.  After all, if the Earth started its life there and was catastrophically expelled, then shouldn't at least some of those asteroids have been part of the early Earth?

The composition of some meteorites suggests planetary origins, or at least that the were once fragments of very large planetessimals early in the life of the solar system:

"What is most unusual about these rocks [designated GRA 06128 and GRA 06129] is that they have compositions similar to Earth's andesite continental crust - what makes up the ground beneath our feet," says University of Maryland's James Day, lead author of the study. "No meteorites like this have ever been seen before." (3)

A smoking gun may be around the corner as space agencies and mining companies turn their attention towards asteroids. Scientists working with the data from WISE are currently piecing together the history of the asteroid families, projecting back in time to glue the pieces of the original 'vases' together. It seems evident to me that Sitchin's work is receiving further vindication from cutting-edge science, and that these endeavours will soon offer his idea some long-awaited proof.

Sceptics argue that there is no evidence that a planet larger than Mars ever existed in the zone currently occupied by the asteroid belt.  Furthermore, the very presence of mighty Jupiter in this region makes the probability of the formation of a terrestrial planet not just low, but virtually impossible.

"“There’s a not a single piece of concrete evidence that would suggest that there ever was a full-sized planet in the asteroid belt,” said Nick Moskovitz, a planetary scientist at M.I.T. “In the region of the Main Belt, it’s dynamically impossible in the presence of Jupiter’s gravitational influence for small bodies to collide and stick together to form a full-sized planet.”

"In truth, the mass of the Main Belt — which extends just past the orbit of Mars to about three and a half times the distance from the Earth to the Sun — has not changed much over the 4.5 billion year life of the solar system. Moskovitz says the belt that we see today is the result of a population of bodies that have spent the subsequent 4.5 billion years interacting and colliding with one another." (4)

I'm generally sceptical when sceptics make such sweeping generalisations.  The history of science is awash with examples of such bold statements proving laughably erroneous years later.  One only needs to review the remarkable variety of extra-solar planets discovered in the last decade or so to see how theoretical positions held by astronomers beforehand subsequently required serious revision.

Knowing about my occasional interest in off-beat beer labels that sport Dark Star symbolism, Jeffrey sent me this one that had been highlighted as the Number 1 insensitive beer label by the popular BroBible website: 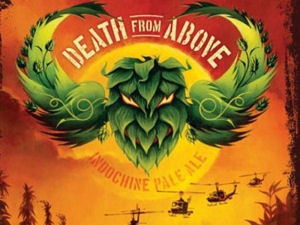 Jeffrey says:  "They link it unnecessarily to Viet Nam.  Seems like they meant something else".  Yes, it does have that Winged Disk feel to it, especially with the reddening Sun behind. And the vegetative swirls are reminiscent of the Egyptian uraei.    'Death From Above' could be talking about an incoming planet, too.  But the apocalypse that I'm thinking of is more likely the one starring Marlon Brando and Martin Sheen.  Still, seems like something of a crossover here.

And then there's a series of videos by Terral et al, who have converted my 'Dark Star' into a 'Black Star'.  He does mention the 'Dark Star' about halfway through.  They think, based upon multiple data streams they've been looking into, that the binary companion is in the midst of its perihelion transit, and will create an event on 17th May.  Well that's next week, so let's see what happens...

Quite what Terral is going to do with the subscriptions and donations he's requesting, given that the world is so close to its end, is anyone's guess.  Presumably not put the cash into savings.

I certainly don't advocate these perihelion events - there's just no way a Planet X object of any size, let alone a 'Black Star', could be so close to us without widespread detection across the globe.

Scientists studying a red dwarf's planetary system have speculated on whether one or more of the worlds there might be capable of supporting life.  Looking at the Goldilocks Zone of the red dwarf Gliese 58, located some 20 light years away, one planet in particular has particularly drawn their attention:

"Because Gliese 581 g is tidally locked to its star, with one side always facing the star and basking in perpetual daylight, while the side facing away from the star is in perpetual darkness, the most habitable zone on the planet's surface would be the line between shadow and light (known as the "terminator")...

"Raymond Pierrehumbert at the University of Chicago studied the range of climates that Gliese 581 g might have and "found one that would have a pool of water on one side, making it look like an eyeball."" (1)

This is exactly the scenario I have put forward in "The Followers of Horus" for the Anunnaki's habitable home-world orbiting the Dark Star in the outer reaches of our own solar system - an eyeball-like effect for the planet that is the source of the term 'The Eye of Horus'. 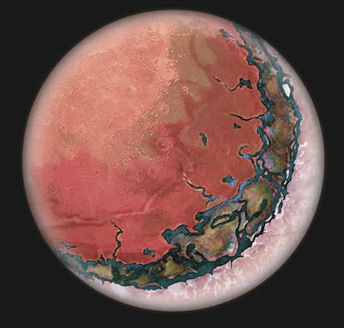 The other thing the astronomers point out is how much older red dwarf stars can be, allowing the potential for a greater window of opportunity for life to evolve during the lifetimes of their planets.

"Alien Planets Of Red Dwarf Stars - "If Life Is Discovered There It May Be Older And More Evolved"  7th May 2013, with thanks to David (article no longer available online)